Justice System: The Chasm Between Expectation And Delivery 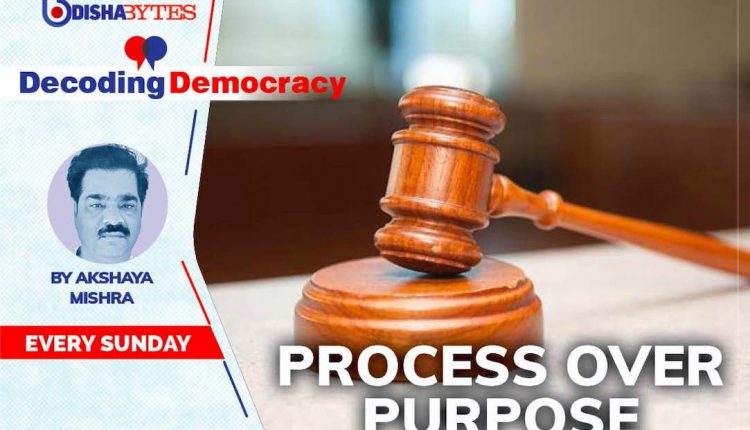 On a wintry December night in 2012, a 23-year-old paramedic student was raped and savagely assaulted by a group of drunk men on a moving bus in Delhi. Badly injured, she died in hospital nearly two weeks later. The incident, now known as the Nibhaya case, shook the conscience of the nation. It sparked outrage all over the country. In the National Capital, it spilled onto the streets. As the call for justice for the girl got deafening, the case moved to a fast-track court. It framed charges against the four adults accused in the first week of January 2013 and in the second week of September the court announced death penalty for them.

The Delhi high court upheld the death sentence in March 2014. Three years and many petitions from the accused later, in May 2017, the Supreme Court confirmed the HC verdict. It took nearly three more years for the four to hang. In all, it took an apparently open-and-shut case seven years to reach conclusion. This despite it being put on the fast route.

Something doesn’t sound right here. The judicial process grinds slow alright, but how slow can it get? This, we must remember, was a special case with a lot of public and media attention involved. Think of the cases which do not garner similar widespread interest. They take years, that is if the aggrieved party has the right resources at hand, to reach conclusion. Imagine the psychological trauma the victims have to undergo despite not being on the right side of the law.

Cut to Hyderabad. In late November 2019, a young veterinarian was raped and murdered by four men near a toll plaza on the outskirts of the city. Her half-burnt body was recovered under a bridge. A massive nationwide outcry demanding justice for the victim followed. The police arrested four accused in the case and a week later all of them were killed in an encounter on the same spot. Unprecedented public jubilation followed the incident. The police were acclaimed as heroes and feted.

And to Uttar Pradesh. After snipers of gangster Vikas Dubey ambushed and killed eight policemen in Kanpur, the conclusion that they would be ‘encountered’ after being caught was foregone. When this eventually happened, a few human rights activists cried foul. Of course, it drowned in the celebratory noise all over. For the state’s police, according to newspaper reports, it was the 119th encounter killing since the current government took charge. The people in the state have been appreciative of the system of quick justice.

In Assam, not long ago, there was a similar celebration and cries of victory when Niraj Das, a person with criminal records, was killed in an accident after, according to the police, he escaped their custody. He was arrested for the murder of an All Assam Students’ Union leader. The social media went hyper baying for blood. A television anchor was openly hectoring the police to ‘show some spine by using bullets’, says a media report. After Das’s death, the public approval of the police and the political leadership remains at an all-time high.

These are not isolated happenings. In many states, tough policing now involves bypassing the legal route to punish criminals. How does one decipher the trend? One way would be to look at the gap between the ordinary citizen’s perception of justice and what the system delivers.

Justice cannot be revenge. We have elaborate processes in place to see to fairness for all parties ensured. But these have led to long trials and low conviction rates. Even in case of heinous crimes, sentencing takes years. If the victims lack the resources to fight a legal battle, including hiring a competent lawyer, there may be no justice at all. Those familiar with the legal procedures would accept that courts can be an intimidating experience for the ordinary individual. This does not square with the general expectation from the justice system. People want justice to be quick and proportionate to the crime. That’s surely not an unreasonable expectation.

Their patience, by all indications, is running thin. They increasingly perceive the processes to be a hindrance to fairness; and the system too distant, indifferent and insensitive. Vikas Dubey, for those not in the know, had 61 criminal cases against him, including seven of murder, in a career spanning three decades. The killing of policemen was the eighth. Yet he was out on bail, continuing his activities with a certain sense of impunity. The Supreme Court was appalled that a person like him was moving free. It called it a ‘failure of the institution’. Obviously, there are many like him across the country, chipping away at people’s faith in the judiciary.

For those not in the know, more than 45 million cases are pending in various courts of the country, with subordinate courts accounting for close to 40 million of them. More than 70,000 cases are pending in the Supreme Court. If no new cases are added, according to an article by Justice (retd) Markandey Katju in the daily The Tribune in 2019, it would take 360 years to clear the backlog. The numbers are worrisome, and surely, the issue does not involve the judiciary only; the problems of infrastructure, staffing etc have to be dealt with other organs of the state. Yet, given the situation, if common people lose faith in the judicial system, isn’t it understandable? Possibly the system has created more victims than the perpetrators of crime have done. Somewhere something is seriously wrong. And it needs fixing.

We are reaching a point where the citizenry would like the legal process to be bypassed entirely if the situation warrants. If the trend continues, then we may soon have the police functioning as the dispenser of justice instead of the courts. That certainly is not an ideal arrangement.

Extra-judicial killings militate against the due process of law. It makes police the final arbiter of justice–judge, jury and executioner rolled into one. As evidence suggests, it is counterproductive in the long run, working against the very people demanding such an arrangement. It allows too much power to be concentrated in the political power-police nexus. The potential for misuse of such power is enormous.

Is there a way out?

That begs another question: Should processes overshadow purpose? If the basic trust in the system of justice appears to have evaporated, then it means its very legitimacy is in question too. The quicker we attend to the flaws, the better. In the Nirbhaya case, it was apparent to people that the rights of criminals outweigh that of the victim. The whole rigmarole of review and curative petitions and the mercy plea only tested their patience. This case in some way reinforced the growing perception that those who can hire competent lawyers can game the system. Dubey’s case was further proof that victims of goons can expect no fair deal. The judiciary and other organs of the state must take a deep look at the processes and find ways to make them more meaningful to people.