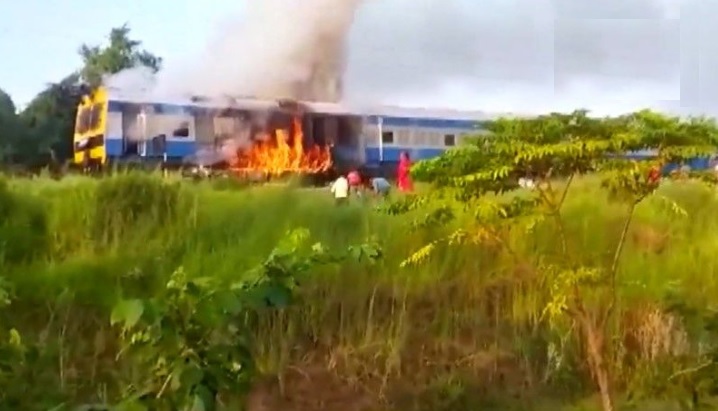 Bhubaneswar: A fire broke out in the engine of a DMU train near Bhelwa railway station in Bihar on Sunday morning.
All aboard the train, however, were later reported to be safe.

According to initial reports, the fire reportedly broke out in the engine of the train when it was headed to Narkatiaganj from Raxaul. Visuals showed the engine in flames and smoke billowing from the train. Luckily, the fire did not spread to other compartments and all passengers were safely evacuated.

Soon after the incident was reported, fire officials reached the spot to douse the flames.

The cause of the fire is yet to be ascertained.

#WATCH | Bihar: Fire broke out in the engine of a DMU train near Bhelwa railway station today. The train was going from Raxaul to Narkatiaganj. The cause of fire is yet to be ascertained. All passengers are safe, fire from the engine did not spread. Fire fighting ops are underway pic.twitter.com/2Hv6DwjJ8a