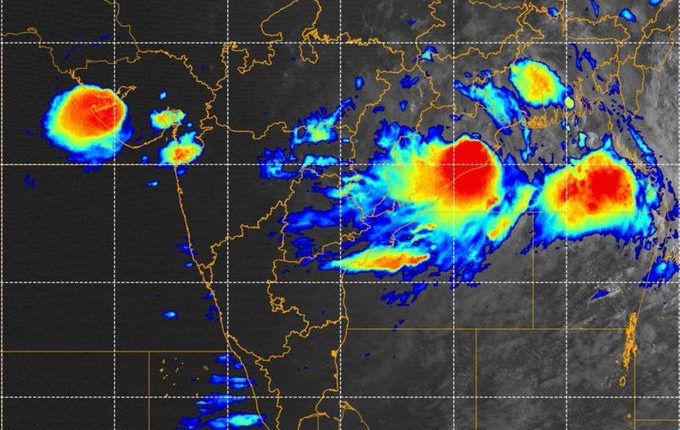 Bhubaneswar: With the deep depression over the Bay of Bengal crossing the north Odisha coast early this morning, the India Meteorological Department (IMD) has sounded heavy rainfall warning for 13 districts in Odisha.

The Meteorological Centre, Bhubaneswar, in a morning bulletin, said that the depression formed over the northwest Bay of Bengal and the adjoining Odisha coast last night crossed the North Odisha coast near Chandbali in Bhadrak in the early morning after intensifying into a deep depression.

The system is very likely to continue to move in the west-north-west across North Odisha, North Chhattisgarh and Madhya Pradesh during the next 48 hours and weaken into a depression in the subsequent 24 hours.

Going by the movement of the depression, there will be heavy rainfall with isolated extremely heavy rainfall at one or two places mostly in the north and interior districts and some places in coastal districts for two days till September 14.

In view of the heavy rainfall, IMD has issued an advisory to the state government to take necessary precautions as there will be flash floods in hilly areas. Besides, there will be temporary waterlogging in low-lying areas, underpass roads, and occasional reduction of visibility causing traffic congestion in urban areas and the possibility of some damage to informal/kutcha roads in semi-urban and rural areas.

Fishermen are advised not to venture into sea along and off the Odisha coast, north and the west-central Bay of Bengal till September 14 as the squally weather with wind speed reaching 45-55 kmph gusting 65 kmph will make the sea condition very rough.

September 13
(Red warning)
Heavy to very heavy rainfall at a few places with extremely heavy at one or two places over the districts of Sambalpur, Deogarh, Angul, Sonepur and Bargarh.

(Yellow warning)
Heavy rainfall at one or two places over the districts of Nuapada, Kalahandi, Kandhamal, Nayagarh, Kendrapada, Balasore, Bhadrak, Jajpur and Mayurbhanj.

September 14
(Yellow warning)
Heavy rainfall at one or two places over the districts of Bargarh, Jharsuguda, Sundargarh and Keonjhar.