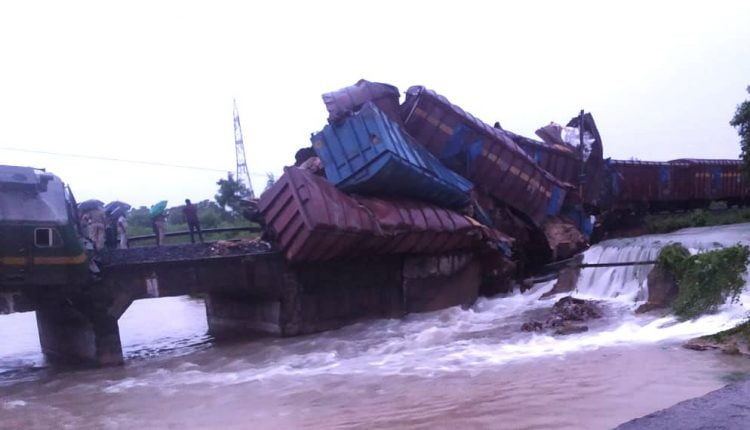 Bhubaneswar: Due to the impact of derailment between Angul and Talcher Road several trains have been cancelled or diverted on the route on Wednesday.

On the other hand, 9 wagons have already been grounded. The 8th wagon was grounded at 9.35 am 9th wagon at 11.20 am. The grounding of 10th wagon and locomotive is in progress.

The first wagon was removed by the 140 ton crane yesterday evening. The remaining wagons were removed by excavators. The engine is to be tackled by road crane, stated a release by the Railways.

In view of suspension of train service in Talcher-Angul Railway section, the following trains will be affected on 15.09.2021

09371 Indore-Puri Special that left Indore on September 14 will run via Sambalpur-Titilagarh-Vizianagaram-Khurda Road.

In view of waterlogging on railway track at Hijli station area along with some parts in Kharagpur railway division under South Eastern Railway, train services in Kharagpur-Bhubaneswar section have been affected partially. As a result, the following trains were controlled en route in Waltair Division of East Coast Railway jurisdiction.

05487 Bangalore Cant-Agartala Special scheduled to pass in ECoR jurisdiction today was controlled at Nawapara Station from 07.27hrs to 8.00hrs.

02874 Yesvantpur-Howrah Special scheduled to pass in ECoR jurisdiction today was controlled at 0745hrs.

06178 Villupuram-Kharagpur Special scheduled to pass in ECoR jurisdiction today was controlled enroute and departed from Srikakulam at 0758hrs.

A goods train had derailed on Angul-Talcher Road single line Section of the East Coast Railway yesterday. As a result, some of the trains had been cancelled, diverted, short terminated and rescheduled.

Flash flood reportedly led to the derailment. While the retaining walls on both sides have been damaged, the track approaching the bridge from Angul has been washed out.