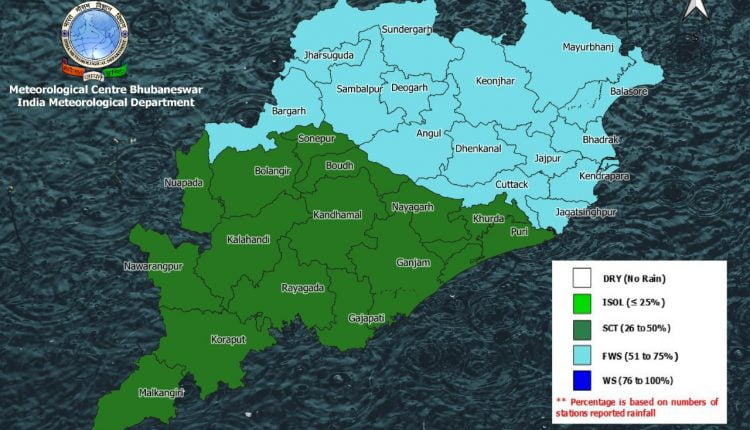 Bhubaneswar: Weatherman has issued a heavy rainfall alert to North-Coastal districts of Odisha under the impact of a Lopar around September 18 and 19.

According to a mid-day bulletin issued by the Indian Meteorological Department on Wednesday, a well-marked low pressure area formed over northeast Madhya Pradesh and its neighbourhood and an associated cyclonic circulation extending up to 5.8 km above mean sea level would impact rainfall in Jharsuguda, Balasore and parts of Madhya Pradesh before the system moves southeastwards to Eastcentral Bay of Bengal.

In view of the active south-western monsoon over Odisha, light to moderate rain and thundershowers have occurred at most places in the state with heavy to very heavy rainfall at one or two places over Mayurbhanj, Keonjhargarh, Balasore, Sundargarh, Puri, Jharsuguda and Rayagada districts.

September 18: Yellow warning, subject to change, has been issued to Balasore, Bhadrak and Mayurbhanj districts. Light to moderate rain or thundershower very likely at most places over the North Coastal districts of Odisha and at many places over the remaining districts.

September 19: Heavy rainfall (Yellow warning) is very likely at one or two places over the districts of Balasore, Bhadrak, Jajpur, Kendrapara, Cuttack, Jagatsinghpur, Malkangiri, Koraput, Mayurbhanj and Keonjhar. Light to moderate rain or thundershowers are very likely to occur at most places over the remaining districts.