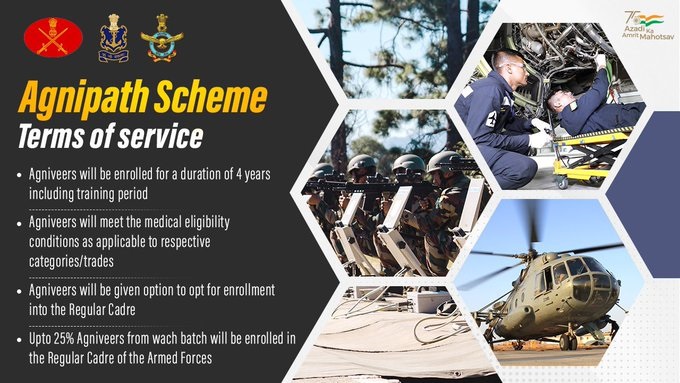 New Delhi: Violent protests across the country against the government’s new scheme notwithstanding, Agnipath has attracted encouraging response.

The Indian Air Force has received 2.72 lakh registrations under the Agnipath recruitment scheme, the Defence ministry said on Thursday. The process, which started on June 24, has attracted over 94,000 applications in just four days, till June 27, PTI reported.

“So far 2,72,000 potential Agniveers have registered themselves on agnipathvayu.cdac.in, thereby expressing intent to go through the selection process to join the Indian Air Force,” tweeted Bharat Bhushan Babu, principal spokesperson of Defence ministry.

The last date for registration is July 5.

The three heads of Armed forces along with Union Defence minister Rajnath Singh announced the Agnipath scheme on June 14 for recruitment of soldiers in the three services of Armed forces.

It led to massive protests from Opposition parties and Armed forces aspirants, who demanded the rollback of the scheme. The main objection was that only 25% of recruited soldiers will be absorbed long term, while the rest will be released.

As protests turned violent, with train stations and coaches vandalised, and even one death being reported in Telangana, the government and BJP -ruled states promised to reserve jobs for the 75 per cent of released recruits, or Agniveers.