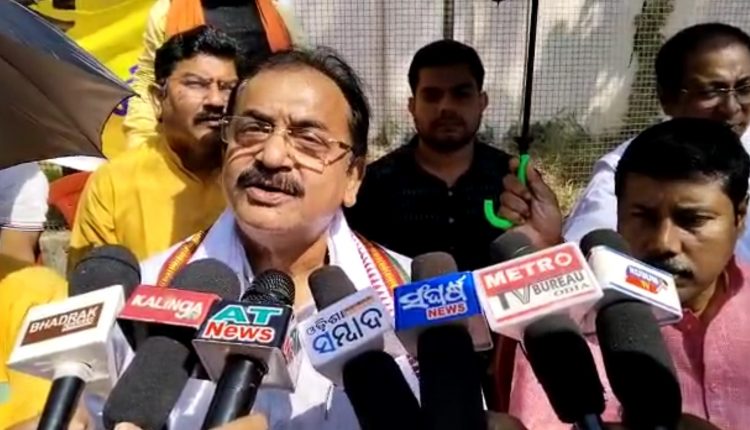 Bhadrak: The state unit of BJP on Monday launched ‘Satyagraha’ in front of the SP office in Odisha’s Bhadrak district in protest against the administration’s indifference towards its allegation use of money and government officials to influence the voters by BJD for byelection to Dhamnagar Assembly constituency.

Hundreds of BJP workers led by the party’s state president Samir Mohanty sat on a dharna outside Bhadrak SP office from 11 am. They alleged that though they had submitted evidence on distribution of cash by the ruling BJD among the voters, neither the chief electoral officer of the state nor the district administration was taking any step to prevent it.

The saffron party claimed that a video has gone viral showing a woman of Paliabandha village in Tihidi block and president of an SHG saying that she was given Rs 4,000 by BJD for distribution among all 12 members of her SHG.

Accusing the BJD of using SHG women as a weapon to fight the bypoll, the BJP said this is not the first case as incidents of distribution of money through women have come to the light many times earlier too.

The SHG women are being used for distribution of money and campaigning for the ruling BJD, Samantsinghar alleged, adding that the ruling party is not accepting the women as BJD workers or supporters when they are caught.

Accusing the ruling party of treating members of SHGs as ‘use and throw’ products, a BJP delegation led by party’s state general secretary Lekhashree Samantsinghar submitted a memorandum to the CEO on Sunday making fresh allegation of distribution of money among voters by BJD in Dhamnagar.

“The BJD has reduced SHG women into use and throw products. This is an insult to all the women,” she said. The SHG women are being used for distribution of money and campaigning for the ruling BJD, she said adding that the ruling party is not accepting the women as BJD workers or supporters when they are caught.

Also Read: BJP Accuses BJD Of Engaging SHG Women As ‘Use and Throw’ Products In Dhamnagar Bypoll In Odisha

Priyanka Chopra Jonas Is Coming To India After Three Years!