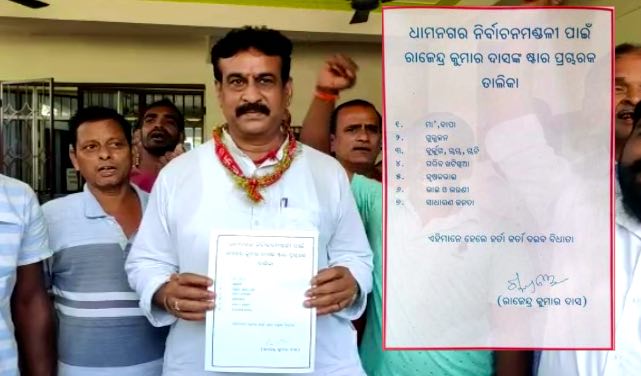 Bhadrak: While BJD has been making a last-ditch attempt to convince Rajendra Das to pull out of the Dhamnagar by-election race, the rebel candidate, who has filed nominations as an independent candidate, on Monday released his list of campaigners, which included people of the constituency.

Earlier in the day, he asserted that there was no question of withdrawing his nomination.

Das’ entry has made the by-election interesting as it is likely to become a four-horse race with BJP’s Suryabanshi Suraj and Congress’ Baba Harekrushna Sethi in the fray. It has, however, queered the ruling party’s pitch, which played the woman card by fielding Tihidi block chairperson Abanti Das to counter the sympathy wave in favour of the Suryabanshi, son of Bishnu Sethi whose demise necessitated the by-election.

On Sunday, BJD general secretary (organisation) and Jajpur MLA Pranab Prakash Das along with other members of the party visited his residence in Bhdarak to persuade him to withdraw his nomination by offering him plum positions in the party, but to no avail. He reportedly has sought the post of deputy chairman, of the state planning board, as a return gift for the withdrawal of papers as an independent candidate.

With the nomination of Independent candidate Subhanarayan Sethi being rejected, total five candidates are now in the fray for Dhamnagar bypoll slated for November 3.

Tihidi block with more than 74,000 of total 2,38,360 voters is a stronghold of Das and it is here that BJD may see a split in support which in turn might provide an edge to Suryabanshi, who is eyeing sympathy votes, and put a stop to the ruling party’s winning stride in bypolls since 2019.