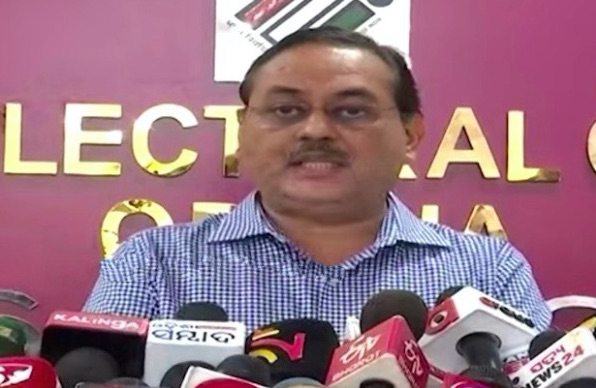 Bhubaneswar: With campaigning picking up for bypoll to Dhamnagar Assembly constituency, a number of complaints are being received against various political parties regarding violation of the model code of conduct, Odisha’s Chief Electoral Officer (CEO) Sushil Kumar Lohani said on Thursday.

“Model code of conduct is a guiding principle for political parties and candidates and needs to be followed meticulously. All need to avoid corrupt practices,” he said.

Stressing on ‘bribery’ and ‘undue influence’, he said that some allegations have come to the notice of the Commission about some candidates/members of political parties or their supporters are indulging in such illegal practices. “Any violation of the law and the model code of conduct will attract severe action under Section 171B, 171C, 171E & 171 F of the Indian Penal Code and under Sections 123(1) and 123(2) of the Representation of the People Act, 1951,” he said.

He further said that an all-party meeting with the representatives of political parties was conducted recently where do’s and don’ts for their guidance were circulated. “All have been advised to follow those provisions meticulously,” he added.

Lohani also informed about ‘cVIGIL’,  an online application for citizens to report model code of conduct/expenditure violations during the election period. “All the reported complaints will be taken care of, within a minimal time of 100 mins by the commission,” he said.

The district administration has made elaborate arrangements for enforcing the model code of conduct in the district and in the constituency. “We have received 102 complaints related to misuse of vehicles, violation of the loudspeaker act, illegal meetings, inducement/gratification Action has been taken in all cases including lodging of two FIRs against the violators,” he said.

The CEO said that police have also initiated a number of enforcement measures. “639 licensed arms have been deposited in concerned police stations so far and 2011 persons have been booked under preventive sections of 107 & 116 CRPC while 196 non-bailable warrants have been executed,” he said.

He also mentioned enforcement against excise law violators with 197 cases being booked and 216 persons arrested, besides the seizure of 14,000 litres of liquor worth Rs. 15.5 lakh.

Regular flag march is being organised in all the gram panchayats and villages by the central para-military forces.

“Three static surveillance teams and as many flying squads are in place to take up enforcement activities. 12 sector magistrates have also been deployed,” he added.

Fresh Cyclonic Circulation Over Bay: Rain Likely To Resume In Odisha From Oct 31