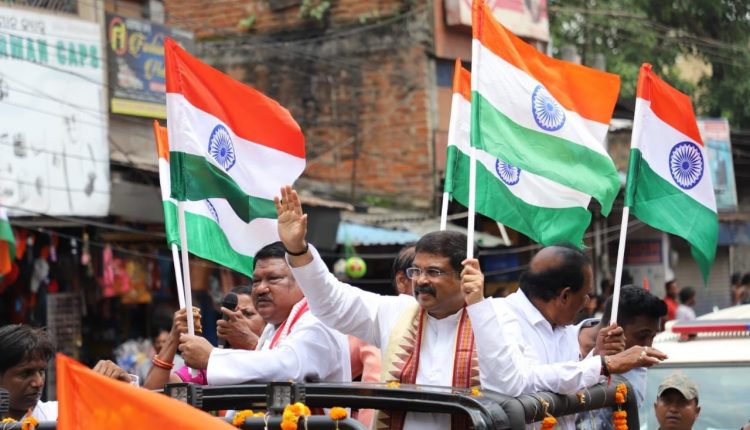 Rourkela: Hailing the Tricolor as a symbol of unity and pride, Union Education and Skill Development Minister Dharmendra Pradhan participated in ‘Har Ghar Tiranga’ campaign in Sundargarh district of Odisha on Saturday.

Amid patriotic fervour and enthusiasm, Pradhan inaugurated an exhibition on ‘Har Ghar Tiranga’ and “Azadi Ka Amrit Mahotsav” in the steel city of Rourkela in the presence of senior BJP leader and former Union Minister Jual Oram .

Noting that the future generations in the country must know learn about our freedom fighters, especially the lesser known and forgotten personalities, Pradhan said the exhibition will instil pride and inspire our youth towards nation building.

Following Prime Minister Narendra Modi’s clarion call, people have pledged to bring the Tricolur home as part of the campaign to make it a historic mass movement and the exhibition creates awareness about the contributions of unsung freedom fighters.

The spirit and sincerity with which our freedom fighters fought for the country’s  freedom must be inculcated among the youth in order to take India to greater heights, the Union Minister said.

Describing the national flag as a symbol of unity and pride of 130 crore Indians, he said freedom fighters sacrificed their lives during the freedom struggle and the youth contribute significantly towards nation building.

Urging the youth to participate in the nationwide campaign, Pradhan also participated in ‘Tiranga Yatra’ in the steel city holding the Tricolour. A large number of people took part in the yatra which passed through different streets with the participants carrying the national flag.

The ‘Har Ghar Tiranga’ campaign has been, as part of ‘Azadi ka Amrit Mahotsav,’ to commemorate India’s 75th anniversary of independence will run till August 15. The Central government has urged people to hoist or display the Tricolour in their homes from August 13 to 15 to celebrate the 75th anniversary of India’s independence.

A citizen, a private organization or an educational institution may hoist or display the National Flag on all days and occasions. There is no restriction on the timing of flag display. The government has amended the Flag Code of India to allow the Tricolour to be displayed in the open and on individual houses or buildings day and night.

Azadi Ka Amrit Mahotsav is an initiative of the Government of India to celebrate and commemorate 75 years of independence and the glorious history of India’s people, culture and achievements. The programme envisages inspiring Indians everywhere to hoist the national flag at their homes. The aim of the programme is to make the relationship with the national flag a more personal one rather than just keeping it formal or institutional.

The idea behind the initiative is to invoke the feeling of patriotism in the hearts of the people and promote awareness about the Tricolour.