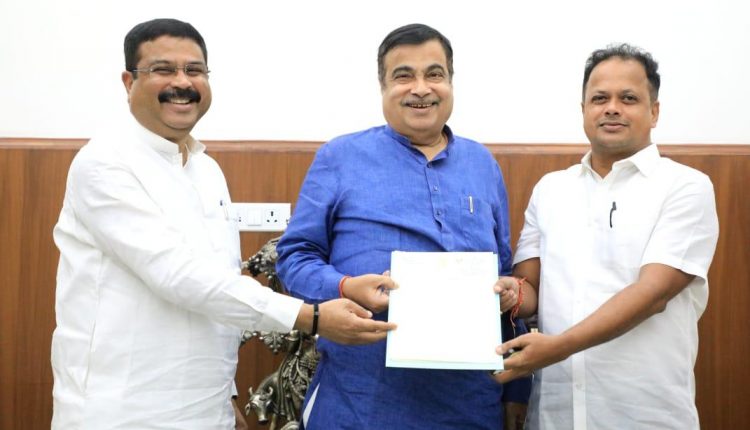 The Union Education Minister, who hails from Odisha, met Gadkari in New Delhi and submitted a letter with a request to get the matter examined and take necessary steps.

Stating that he has received a petition from a BJP leader from the Mahanga Assembly segment of the state, Dharmendra said the existing six-lane Chandikhol-Paradip National Highway 5A is getting expanded into eight lanes. This expansion will be a boon in consolidating the economic corridor as it will facilitate a huge boost to connectivity, he said in the letter.

The Minister pointed out that the narrow bridge situated at the Olasuni Chowk over the Gobari drainage cut on the highway congregates and contributes a huge uncontrollable flow of water to nearby 30 Gram Panchayats, affecting more than 1000 acres of irrigated and residential land distressing around two lakh people of Salipur and Mahanga Assembly constituencies of Cuttack district.

“Every year these villages are badly hit by flood-like situations and the people living here are left only to lament the losses incurred to them. Though this drainage cut has not been considered a river, it directly falls into the Bay of Bengal forming its own river mouth,” said Dharmendra’s letter, which was released to the media.

Therefore, the widening of the Gobari cut bridge of Olasuni Chowk may be included in the expansion work of the NH-5!in the Detailed Project Report (DPR).

“I take this opportunity to request you to kindly have the matter examined and take necessary actions to mitigate the flood-like situation in those Gram Panchayats and help lakhs of people to give up the fear of being hit by flood every year,” Dharmendra added.

Responding to his request, Gadkari assured that necessary steps will be taken for widening the bridge, Sources in Dharmendra’s office said.