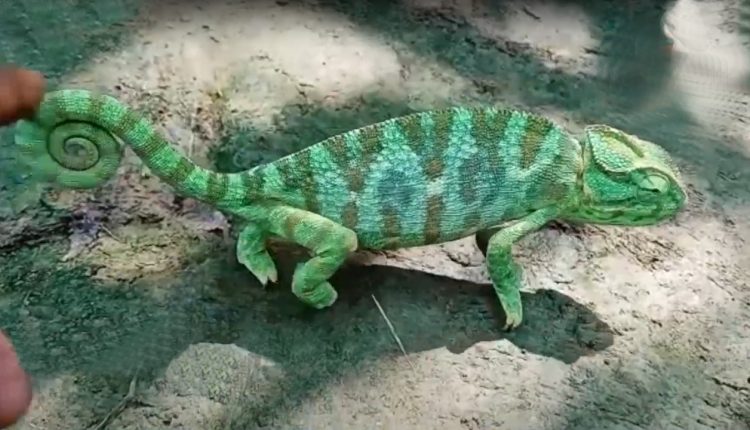 Bhadrak: A rare species of chameleon, which keeps changing its colour, was rescued by forest officials in Odisha’s Bhadrak district on Wednesday.

The chameleon was spotted by the residents of a village near Bhadrak when it was moving in a bushy area in the morning, locals said.

A large number of people gathered in the area to have a glimpse of the creature which was also seen climbing a tree.

Apprehending that the rare creature, which was colourful and looked different from normal chameleons, may be harmed by stray dogs and other animals, villagers kept a watch on its movement and informed forest officials.

On being informed, a team of forest personnel including Forester Madhusmita Das rushed to the village and rescued the chameleon. “It belongs to a rare species of chameleon. We are taking it to our office. After a proper examination, we will decide where and when to set it free,” Das said.

A senior forest official said that the chameleon was of great environmental value as it belongs to a rare species. He thanked the villagers and the local Sarpanch for playing a major role in getting it rescued by informing the forest staff.