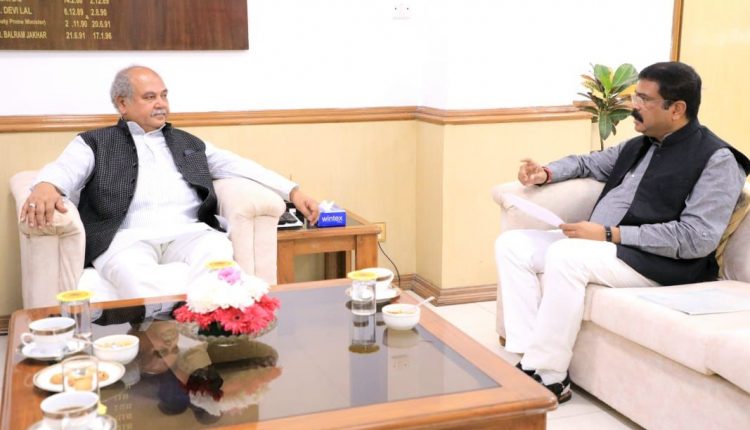 The Minister, who hails from Odisha, informed Tomar that he has received a petition from various farmers’ groups in Bargarh district alleging a nexus between insurance company M/s. HDFC Ergo General Insurance Company Limited, which is enlisted by Odisha, and state government officials. Due to this, the implementation of PMFBY is derailing in the district, he said.

The petitioners, while seeking a review the payout of the insurance sum by the company, had stated that the insurance company was entrusted with the responsibility of crop insurance under PMFBY in Paikamal, Jharbandh, Padmapur, Gaisilat, Sohela and Bijepur Blocks of Baragarh district, he said.

However, it has paid very low insurance sum against the crop loss due to drought situation during Kharif 2021 season. The alleged low payment of insured sums is due to faulty Crop Cutting Experiments (CCE) data provided by  officials of Odisha and manipulation of CCE yield data by the insurance company, Dharmendra said.

“Sadly the CCEs have been conducted unscientifically without the usage of proper technology to suit the insurance companies in a possible case of collusion between private insurance companies and government officials. Resultantly, in some Gram Panchayats, the payout rate is as low as 5% against expected pay rate of 76.56%,” Dharmendra said in his letter.

The petitioners have also alleged that these private insurance companies have manipulated the crop cutting experiment data in collusion with officials of state government resulting in lower-than expected insurance pay out, he said.

“The ineffectiveness of the local administration and cunning tactics of the M/s HDFC Ergo General Insurance company is derailing the implementation of PMFBY in Baragarh district,” Dharmendra alleged, urging Tomar to order an investigation into the matter.