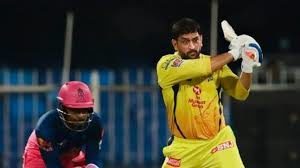 Bhubaneswar: When MS Dhoni arrived at the crease on Tuesday, CSK needed 103 runs to win from 38 deliveries against Rajasthan Royals, meaning that the batsman had no time to settle.

However, Dhoni only went for the hits in the final over of the innings when the match was already lost, earlier relying on Faf du Plessis to take on the bowlers.

With nothing to lose, Dhoni loosened up and brought the memories of the good old days by thumping Tom Curran for three consecutive sixes in the last three deliveries of the match, one of which landed on the street outside the Sharjah stadium.

The resident who came across the ball picked it up and took it with him as the IPL cameraman panned outside the stadium. The light-hearted incident was played on the big screen, as the man walked away with the very special IPL memento.

The official Twitter account of IPL tweeted with the video of the exact moment when the Sharjah resident got lucky.

Look who has the ball that was hit for a six by MS Dhoni.#Dream11IPL #RRvCSK pic.twitter.com/yg2g1VuLDG

Despite CSK ending up on the losing side, Dhoni’s fans welcomed his hat-trick of sixes with open arms.

However, former Indian batsman Gautam Gambhir, who has played with MS Dhoni for a large part of his career, lashed out at the CSK skipper for coming significantly late in the batting order.

“MS Dhoni batting at No. 7? And sending Gaikwad before him, Sam Curran before him. Makes no sense to me. Yes, you can talk about MS Dhoni’s last over when he hit three sixes, but it was of no use, to be honest. It was just all personal runs. See, if someone else would have done this, some other captain had batted number seven, he would have got a lot of flak. It is MS Dhoni probably why people don’t talk about it. When you don’t have Suresh Raina, you’re making people believe that Sam Curran is better than you,” Gambhir was quoted by ESPNCricinfo.