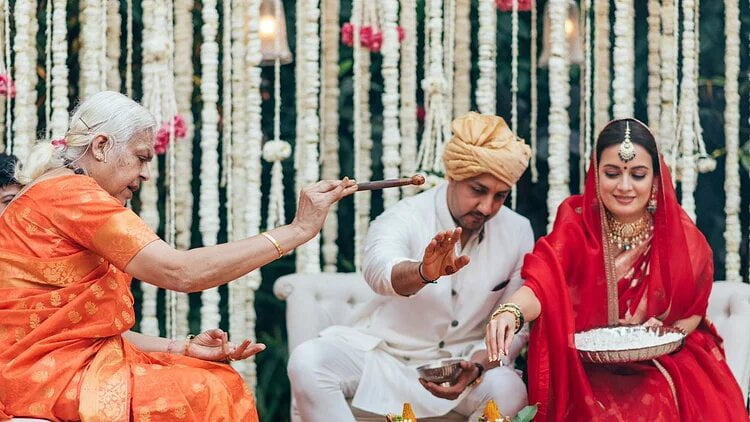 Mumbai: Bollywood actress Dia Mirza, who got married to businessman Vaibhav Rekhi on Monday afternoon, endorsed her views on feminism and patriarchy, by getting a woman priest to solemnise her wedding in a private event at Bell Air Apartments in Bandra West.

Dia took to social media and shared pictures of her Hindu wedding. To everyone’s surprise, the actress had an elderly woman priest presiding over the ceremony. She identified her as Sheela Atta.

Thank you Sheela Atta for conducting our wedding ceremony. So proud that together we can #RiseUp #GenerationEquality https://t.co/aMZdyEZRdF pic.twitter.com/BeyFWCSGLw

In one of the photos, Dia and Vaibhav can be seen exchanging garlands, while in another photo, they take ‘pheras’, in yet another photo, the bride and groom are seated in front of the holy fire while the priestess recites mantras, according to media reports.

Smashing patriarchy and the stereotypes around women remarrying, the 39-year-old wrote on Twitter, “Love is a full-circle that we call home. And what a miracle it is to hear its knock, open the door and be found by it. May all puzzles find their missing pieces, may all hearts heal and may the miracle of love continue to unfold all around us.”

Dia is half German and half Bengali Hindu by genes and half Muslim by parentage. She uses her step-father’s surname Mirza and recently added the one of her father Frank Handrich – which christens her as Dia Mirza Handrich.

Dia was earlier married to film producer Sahil Sangha. The couple parted ways back in 2019, after being together for 11 years. She has been rumoured to be in a relationship with Vaibhav for quite some time, but they never spoke about it publicly.

What To Do When Life Shuts A Door? Ask Smriti Irani

Bollywood Is Male-Dominated, Older Men Like To Be Cast…

Know The ‘Concern’ Of Priyanka Chopra’s…

Dia Mirza Spars With Sambit Patra Over Insensitive Post On…