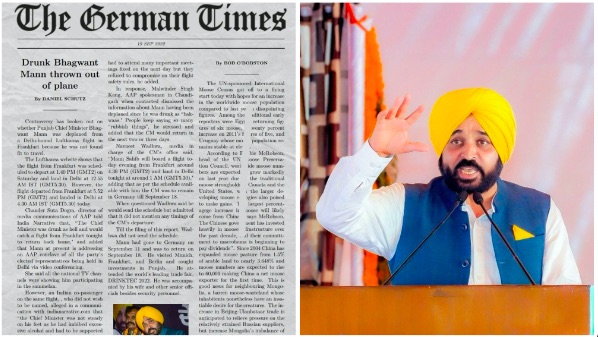 New Delhi: Punjab Chief Minister Bhagwant Mann had to skip his scheduled flight from Frankfurt to Delhi after he was reportedly deplaned in Frankfurt as he was “too drunk to walk”.

Mann was on a trip to Germany from September 11-18. The flight-tracking website Flightaware shows that Lufthansa 760 flight from Frankfurt to Delhi was delayed for around 4 hours. It took off at 5.34 pm instead of the scheduled 1.40 pm and landed in Delhi at 4.40 am.

While the report has triggered a huge outcry with opposition parties saying the Chief Minister has “shamed Punjabis”, his office claimed that he is unwell and would catch a flight later tonight from Frankfurt.

“Disturbing media reports quoting co-passengers say Punjab Chief Minister Bhagwant Mann was deplaned from a Lufthansa flight as he was too drunk to walk. And it led to a 4-hour flight delay. He missed AAP’s national convention. These reports have embarrassed and shamed Punjabis all over the globe,” tweeted Akali Dal leader Sukhbir Singh Badal.

Disturbing media reports quoting co-passengers say Pb CM @BhagwantMann was deplaned from Lufthansa flight as he was too drunk to walk. And it led to a 4-hour flight delay. He missed AAP’s national convention. These reports have embarrassed & shamed Punjabis all over the globe.1/2 pic.twitter.com/QxFN44IFAE

“The CM was not steady on his feet as he had imbibed excessive alcohol and had to be supported by his wife/security,” German Times reported. Congress also tweeted this news report.

The passenger said that the departure of the flight was delayed by over 4 hours as the language of the CM’s entourage had to be taken off and Maan was thrown out of the plane.

“The Chief Minister returned on September 19 as scheduled. All these social media reports are propaganda. The opposition is rattled because Mann is effectively getting some investment from his foreign trip…you can also check with Lufthansa airlines,” NDTV quoted AAP spokesperson Malwinder Singh Kang as saying.

The airline’s statement said: “Our flight from Frankfurt to Delhi departed later than originally planned due to a delayed inbound flight and an aircraft change. For data protection reasons we do not provide any information regarding individual passengers.”