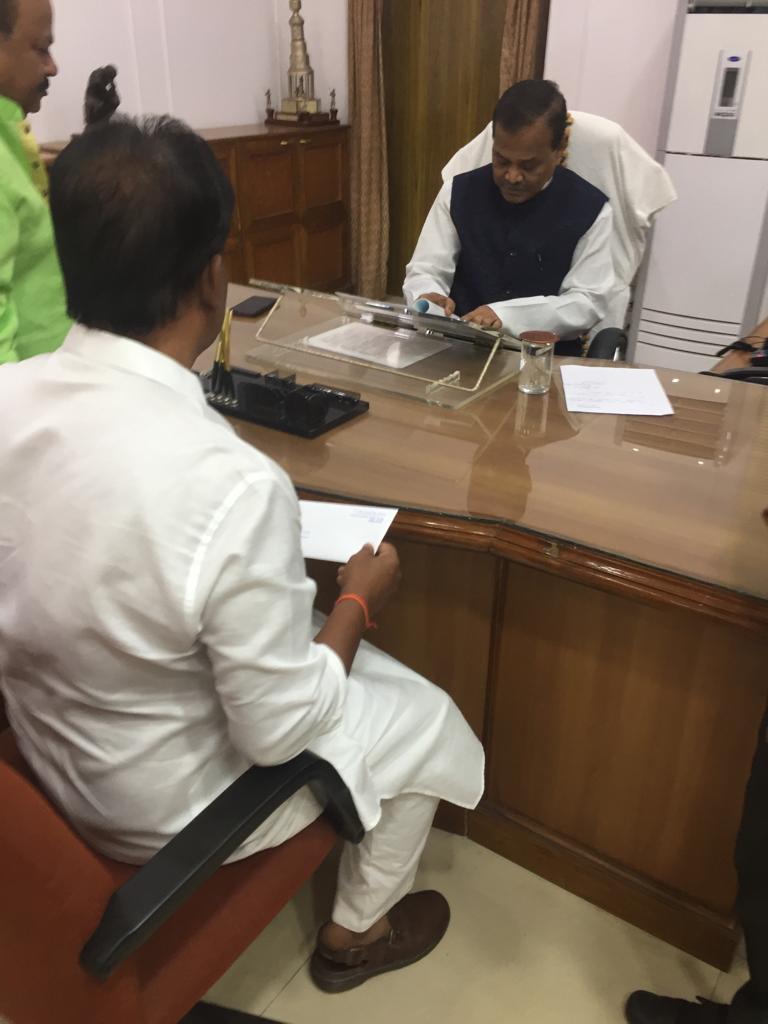 Bhubaneswar: Senior BJP leader and Dilip Ray and Bijoy Mohapatra resigned from the primary membership of the party on Friday.

While Mohapatra has sent his resignation letter to the party’s national president Amit Shah, it was not immediately known whether Ray has done the same.

Ray met the Speaker Pradip Amat at his State Assembly chamber at 10 am and submitted his letter of resignation as a legislator to him.

It is with deep anguish that I have decided to quit as the Member of State Legislative Assembly as well as from the Membership of Bharatiya Janata Party (BJP). pic.twitter.com/pXMrezRU9H

Ray, who left the State Assembly without briefing the media after submitting his resignation letter, also informed about his resignation from the primary membership of the BJP and his unwillingness to contest the ensuing Assembly elections from Rourkela next year in his Tweeter post.

Talking to the media, the Speaker said he had accepted Ray’s resignation in accordance with rules and procedures. “I have forwarded his resignation letter to the Election Commission for appraisal and necessary action,” he added.

After submitting his resignation letter, Ray left for New Delhi from where he will fly to the United States in the evening.

While Ray has not cited any reason for his decision to quit the BJP, sources said he was peeved at the dilly-dallying attitude of the central and the state party leadership in not fulfilling his two long-standing demands— the second bridge over the Brahmani river and upgrading Ispat General Hospital (IGH) into a super speciality hospital in Rourkela.

There were no immediate comments from the senior BJP leaders on the matter.

Reacting to the decision of Ray to quit the BJP on Wednesday, BJP state president Basanta Panda had said that it is up to a leader to decide whether to remain in the party or quit.

He had also said that since the Prime Minister had announced construction of the second bridge over the Brahmani river and upgrading the IGH into a super speciality hospital, these two will be fulfilled without fail. “But if a leader has taken the decision to quit the party citing official lacunae, then it is up to him.”

Notably, Ray in a press briefing here on November 27 had said, “An influential leader of my party does not want a repeat of the number of votes polled in favour of the BJP in Rourkela and Sundargarh in the last assembly elections as he fears that I will get the entire credit of any development work done in Rourkela during my tenure. This is not how I feel, but people of Rourkela do. I will try for one last time. If I fail in my efforts, I will take a decision in the next 3-4 days.”

Despite being a BJP MLA, Ray was hardly seen in any political programme of his party and this had been a case since long. After all, his strained relationship Union Minister Dharmendra Pradhan is an open secret.

It may be recalled that Ray had a meeting with Mahapatra on Wednesday.