Do You Laugh When You Are Butt Of A Joke? 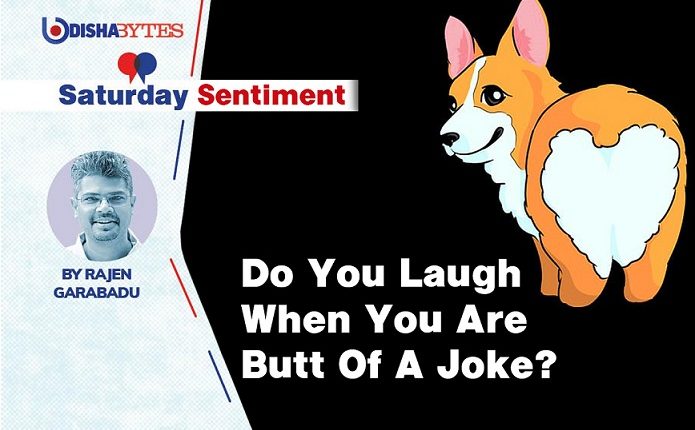 Ever written something you enjoyed that was never published?

Many years ago, my friend Subrata Ghosh and I collaborated on an article for our school magazine. We imagined an idea that was fun but risky. Over the years, many articles have praised the school and its teachers. Every year, the magazine would publish one such glorified article. The authors kept changing but the content was similar. It was predictable.

We wanted to write a piece that reflected an unsanitised view of how students perceived their teachers.

There was no malice in our intent. We wanted readers to smile while reading our copy.

Before we began, some unanswered questions crossed our minds:

We decided we would cross the bridge when we came to it.

Since we were co-authoring the piece, we agreed on a structure. My friend Subrata would write his lines while I wrote mine. We completed it in one sitting and read our lines to each other. We couldn’t stop giggling.

‘Mr. Mishra (name changed) maintained his booming voice through the eight periods in the school and yet had enough energy to take half the class back home for tuition in the evening,’ Subrata wrote.

Most lines were harmless but funny. In hindsight, there was one that crossed the line.

‘Mrs. Das (name changed) was the self-proclaimed iron lady who rusted in the course of time.’

I plead guilty. I went overboard with this one. It was a juvenile thing to do. There’s a backstory that merits disclosure.

The same teacher had announced in the presence of all my classmates that she would resign if I passed the subject she taught in my school leaving examination. I remember feeling humiliated. When the result was declared, of all the subjects I appeared in, I scored the highest in her subject. And no, she did not resign. 🙂

The article had other one-or two-liners that were fun to read, whether you agreed with them or not. We were happy with how it shaped up. And then came the tricky part. How do we take it to Mr. Mishra, our teacher who was also the editor of the school magazine?

Would he publish it? Or throw us out? We decided to take the bull by its horns.

We reached his home and shared the article with him. He was the first teacher mentioned in our piece. He read it, paused, removed his glasses, and stared at us. We kept a straight face. We were brave. And ready for the consequences.

When he finished reading, we reiterated that we intended to present readers with a light, funny piece, and there were no hard feelings.

He cleared his throat before he said, “If I publish this, it will end my stint as editor of the school magazine. I am quite happy being the editor and in no mood to lose it.”

The article never got published.

We did get carried away in a couple of instances, but essentially, it was a fun piece. We were aware some teachers might view it as an act of rebellion by 15-year-olds against the system. But we wanted to voice our views as students, and we felt the school magazine ought to reflect them.

Mr. Mishra, our editor, could have asked us to remove or tone down the ones he found objectionable. But that perhaps never crossed his mind. Or even if it did, he did not share it with us. He told us our article could not be published.

Looking back, only a couple of lines in our article required moderation. But it deserved to be published.

That it did not — reflects a moot point — as a race, we struggle to laugh at ourselves. We take ourselves too seriously. We are quick to laugh at others. But when it comes to us, we feel offended. Our ego comes in the way. Jokes are fun when directed at others. Not us.

Things are changing now. But we still have a long way to go.

In 2006, the news network I work for launched a television show which looks at news events and people in the news in a lighter vein. It’s a show laced with satire. Politicians and newsmakers are spoofed. Barring a few, most of those spoofed have taken it sportingly.

The widespread popularity of standup comedy has helped. In such acts, the artist regales the audience while making fun of them. People began to feel it was okay to be made fun of, provided there was no malice. But still, there are some who feel offended.

We need to loosen up. It’s okay to be the butt of a joke. I have deep respect for those who can laugh at themselves. There aren’t too many around who can do that. I instinctively warm up to such people.