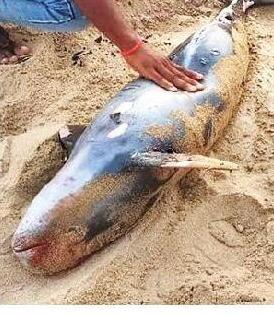 Puri: Carcass of a dolphin was found at Konark’s Chandrabhaga beach in Odisha’s Puri district on Thursday.

On being informed, the Forest Department officials reached the spot and seized the carcass.

According to sources, the dolphin was found dead on the beach on Thursday afternoon. The tourists and the locals soon gathered at that spot.

Though the exact reason behind the death of the dolphin is yet to be known, it is suspected that it might have died after being hit by a trawler.