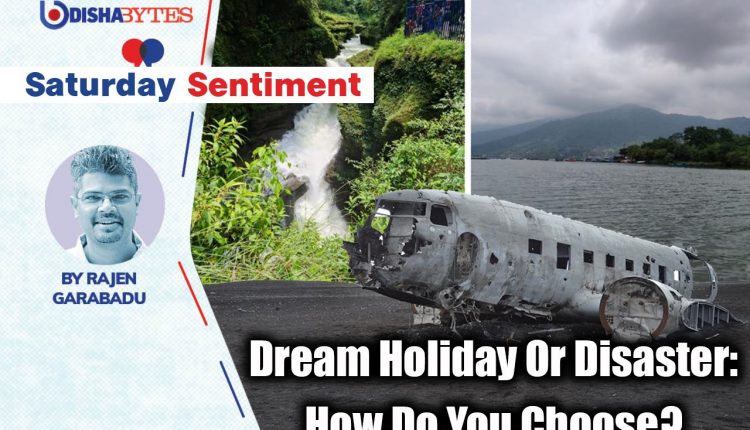 Do you experience extreme anxiety during a flight? Your heart beats faster when your flight travels over water bodies or mountains. Or the entire duration of the flight. What if the flight crashes, you fear!

Last summer, I planned a family trip to Nepal.  I had heard a lot about Pokhara before I chose it as a holiday destination. It meant breaking our journey at Kathmandu Airport and boarding a small aircraft (ATR) to Pokhara. Just when I was planning, a Tara Air plane crashed in northern Nepal, killing 22 people.

Nepal, home to the Himalayas, has some of the most difficult terrains to navigate and weather that can change suddenly.  I became sceptical about the destination. But, after a conversation with my wife, we decided to go for it.

“Death can occur anywhere, and at any time,” my wife said. “Does that mean we won’t fly to mountainous regions or hilly areas?” Barely a month before this plane crash, the brother of a member of my home staff, lost his life in the most bizarre manner. He was leaving home after work on a scooter when a dust storm shook the branch of a tree, falling on him and his bike. He lost his life. The dust storm lasted barely 5 minutes. Except for a brief drizzle, it hardly rained. And the few drops that fell were limited to a small part of the city. No other casualty was reported anywhere else on that stretch or in other parts of the city. But one life was lost. It was his fate. What else can explain such an unfortunate way to go?

Death can come anywhere, even in relatively safer environments. Could those working at the North & South Towers of the World Trade Centre in New York (on September 11, 2002) have ever thought their tower would be hit by a plane? Think of those who miraculously escaped because they were late to work or did not go to work that day. I have read a report of someone who briefly went back home after leaving for work that day because he had missed something. And lived to tell the story.

What’s the point I am making here?

The World Trade Towers in New York are regarded among the safest places to work. But over 2750 lives were lost on Sept 11, 2002.

Whatever Will Be, Will Be

You and I have arrived in this world with an expiry date written in our package, just that we have no way to decipher the date.  Last weekend, 72 passengers and crew aboard the Yeti Airlines flight from Kathmandu to Pokhara crashed half a mile from the airport. Most of those were tourists who were excited to get there. One tourist in his enthusiasm even live-streamed the descent of the aircraft a few minutes before it was due to touch down. Within seconds, the aircraft burst into flames. All lives on board that aircraft were lost.

The news of the crash deeply troubled me. Watching that video, a day later sent shivers down my spine. It took me back to those 25 minutes that I was airborne in the ATR on my way to Pokhara, barely seven months ago. Though it was a considered decision to fly there, I couldn’t stop myself from worrying while the flight was airborne.

It was a very small aircraft where the crew decides where you sit so as to balance the weight in the cabin. ATR aircrafts are designed to operate on shorter runways and in challenging terrain. They have a relatively low approach speed and a steep approach angle that allows them to land on shorter runways. However, landing on smaller runways and flying in hilly and mountainous areas require a high level of skill and experience from the pilots and they are subject to weather conditions, visibility and aircraft weight.

It was only after the aircraft touched down did, I breathe normally. And the same ordeal repeated itself during the return journey. My family and I had a great time at Pokhara. It was a fulfilling holiday. It worked out well for us at that time.

But the journey to the same destination can thrill you or kill you. It could be a dream holiday for some. And a disaster for others.

How do you choose?