Drive At Your Own Risk On Bhawanipatna’s Potholed Roads 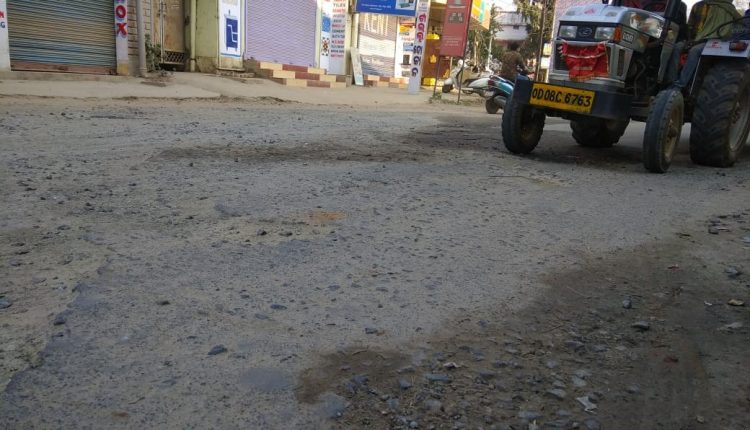 Bhawanipatna: Potholes that dot the roads of Mahavir Pada in Bhawanipatna have made life miserable for motorists and residents.

Thousands of vehicles ply every day on the state highway, crossing through the town, from Ghodaghat Chowk to Dayanidhi Chowk, a stretch of 500 meters.

A shopkeeper, Manas Ranjan Mohanty said that he had put up a post of the bad road condition on social media in the rainy season. “Many residents commented and many likes were received. Days after, authorities came and some of the potholes were filled up but the general condition of the road did not improve,” he said.

The problem is not confined to the poor condition of the roads but also bad drainage facilities. “Dirty water from the choked sewerage flows on the road at Mahavir Sanskrutika Anushthan, (MSA) Chowk,” said another resident, Santanu Behera adding the local authorities were apprised of the condition.

The present scenario poses a threat to the commuters and minor accidents are more frequent on the busy road. Dust is adding the commuters’ woes in the winter. A shopkeeper, Murari Babu said.

The executive engineer of Public Works Department, Bhawanipatna, Ajit Babu, who looks after the road condition, said road work on the outskirts of Bhawanipatna is on and till march a new road will be completed in the town.

Convenor of Kalahandi Sachetan Nagarika Manch, Satya Mahar said while government asks motorists to wear helmets for safety, attention should also be paid to the poor condition of the roads in the town.