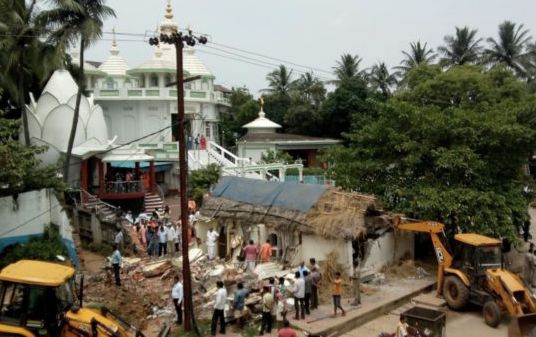 Bhubaneswar: A joint squad of Bhubaneswar Municipal Corporation (BMC) and Bhubaneswar Development Authority (BDA) on Saturday began a drive to remove illegal encroachments in front of the ISKCON temple situated alongside National Highway-16 at Nayapalli here.

As many as three JCBs have been engaged to remove the encroachments including a ‘Samadhi Peeth’ in front of the temple.

Some devotees and priests of the temple opposed the demolition drive alleging that the BMC and BDA could have given the temple authorities more time for making alternative arrangements.

Two platoons of police force have been deployed at the spot to prevent any untoward situation.

Two days ago, the BMC had issued show-cause notices to the ISKCON temple and Hotel Presidency with regard to the waterlogging problem on NH-16.

Through the notice dated 25.7.2018, the BMC had asked the president of the ISKCON temple for report on encroachment and unauthorised construction of shops on the land reserved for ‘Right of Way’ adjoining the highway.

The encroachment prevents flow of storm water and causes insanitary condition in the area, it added.

Similarly, the show cause to Hotel Presidency mentioned about unauthorised and illegal parking on the ‘Right of Way’, discharge of dirty water causing insanitary condition in the area and a generator installed on government land adjoining the hotel.

The hotel manager and temple president were asked to reply to the notice in seven days.

Notably, NH-16 in front of ISKCON temple at Nayapalli witnessed severe waterlogging and traffic jam following incessant rainfall, recently. Vehicles were seen floating in the rainwater that had accumulated on the road in a absence of proper outlet.