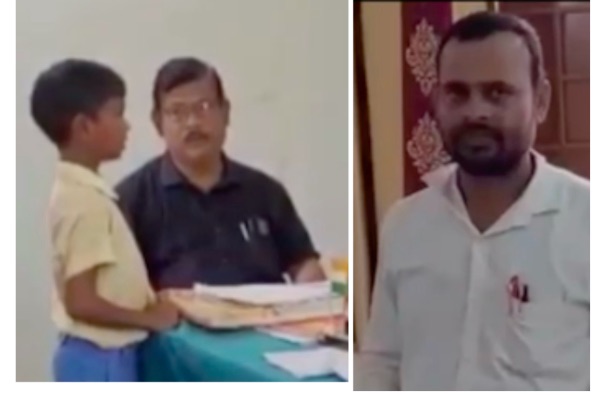 Keonjhar: A Class VI boy was allegedly beaten up by the school principal in a drunken state at Government Adarsh Vidyalaya in Odisha’s Keonjhar district after he failed to answer a question, prompting the authorities to launch a probe into the incident on Thursday.

The incident took place in the school located at Sundarpal under Hatadihi block of  Keonjhar district on Tuesday after which the parents and guardians of several students approached the Sub-Collector and Block Development Officer (BDO) on Wednesday to seek appropriate action, sources said.

It was alleged that Principal Nityananda Barik always came to school in an inebriated state and misbehaved with students. Earlier, some girl students had approached the officials and complained against the teacher.

The latest incident happened when the Principal was teaching Class VI students and the tribal boy was unable to answer one of the questions asked by Barik, who beat up the student with an iron rod in a fit of rage.

Later, some students informed their guardians about the incident as the minor was in a state of pain and agony.

Irked over the incident, some of the parents visited the school on Wednesday to obtain details about the incident and were shocked to find the Principal in a drunken state.

They approached the officials after which Anandpur Sub Collector Anand Kumar Sethy and BDO Bichitra Kumar Kar visited the school to enquire into the incident. They spoke to the victim as well as other students about the incident.

Sethy said complaints about the behavior of the teacher, who was found in an intoxicated state, had been received earlier too. The sub-collector assured the parents that appropriate action would be taken.

“Steps will be taken in accordance with law for the inappropriate conduct of the Principal as coming to duty in a drunken state is strictly prohibited,” he said.

The boy and other students shared in detail about Barik’s misconduct. The victim informed the officials that he was beaten up five times with an iron rod when he failed to answer the teacher’s questions.

Barik, who confessed to have been drunk and beaten up the boy, claimed that he drinks outside and does not consume alcohol inside the school.

Agitated guardians demanded immediate action against the teacher and said he should be barred from entering the school premises.