Bhubaneswar: While the India Meteorological Department (IMD) has forecast a rise in day temperature by 3-4°C at several places in Odisha during the next 2-3 days with Southwest Monsoon having subdued over the state, heavy rain is likely to lash some districts again from August 4.

Heavy rainfall is expected at one or two places in the South Odisha districts of Ganjam, Gajapati, Rayagada, Kandhamal, Malkangiri, Koraput, Nabarangpur and Kalahandi from 8.30 am on August 4, the MeT office said, adding that rainfall activity will increase in the subsequent two days.

The state will continue to experience light to moderate rain between August 1 and August 3. Yellow warning for thunderstorm has also been sounded till 8.30 am on August 3.

CHECK THE IMD FORECAST FOR THE NEXT 5 DAYS 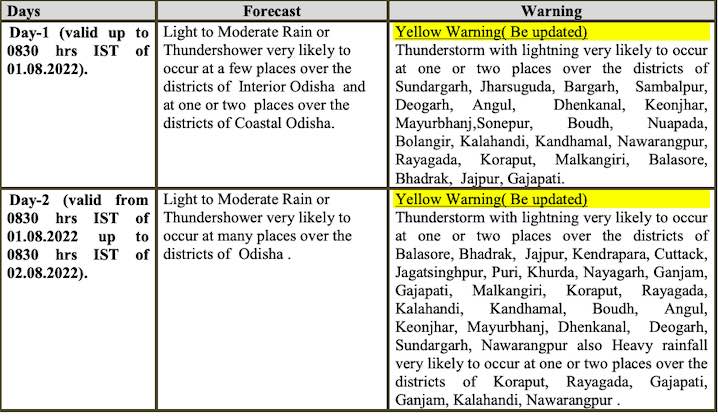 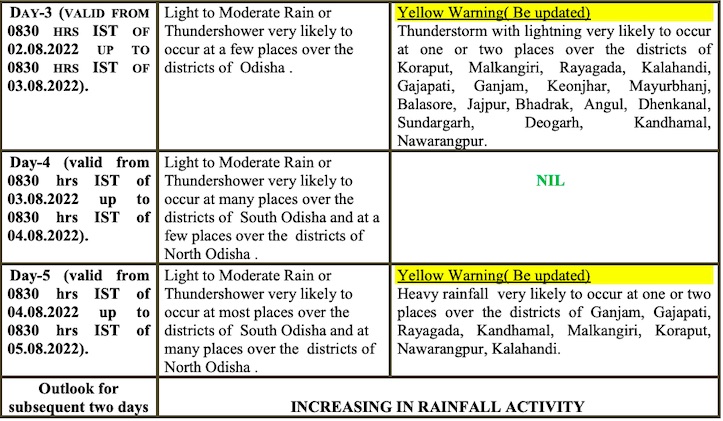 On Saturday, SOA’s Centre for Environment and Climate (CEC), Bhubaneswar, said that a possible low pressure along the central Odisha coast may end the existing dry spell. “A cyclonic circulation, likely to form over the Bay of Bengal along Odisha coast on August 4 or 5, will develop into a low-pressure area after 2-3 days. Numerical models indicate that the system might gradually intensify into a deep depression on August 9,” a CEC bulletin said.

Light to moderate rain will commence from August 3, while very heavy rainfall is likely to occur in the coastal and southern districts between August 7 and 9 under the impact of the system. Interior and north Odisha districts will experience similar weather conditions thereafter.