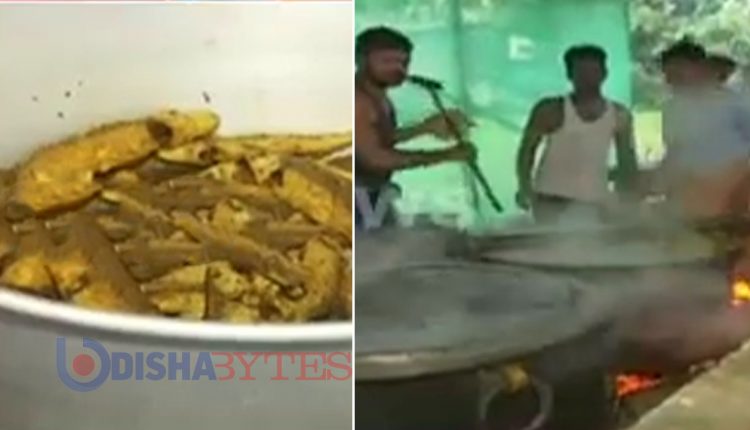 Bhubaneswar: From shopping to pandal hopping to participating in ‘arati’, Dussehra offers many moments to rejoice and celebrate. One such occasion is partaking Devi’s prasad in community feast. Among the cooked prasad served in these feasts, ‘fish bhog’ stands out as an exception.

As the rituals differ from day to day on all 9 days of Navratri during puja of Goddess Durga, the prasad to Devi also changes accordingly. On the day of Navami (9th day), several puja committees in Odisha offer different dishes of fish bhog to Devi.

The puja pandal at Chandini Chowk stands out in preparation of fish bhog in Cuttack city. Since this community puja is considered one of the oldest in the city, its bhog is highly sought after among the devotees.

According to the secretary of Chandini Chowk puja committee, they have been following the practice for over 200 years. He recalled to have seen the offering prepared by his grandfather during his childhood. “It is practised since the days when the royal family was performing the Durga puja. After the bhog is offered to Devi, the entire cooked bhog is served among the people,” he said.

“This year, we have prepared Navami bhog for around 10,000 people. Besides different items of fish, we have prepared rice, dal, different varieties of curry and sweets. More than 5 quintals of fish and equal quantity of rice have been procured for the community feast. At least 30 cooks are engaged in preparing the bhog. They are helped by around 50 volunteers,” he said.

In a Durga puja pandal in Bhubaneswar also, similar arrangements have been made. Here, the fish bhog on Navami is served to around 7,000 devotees. The practice has been followed since the beginning of the Durga puja by the local community, said the puja community secretary.

Similar tradition is followed in Endar village under Derabish block of Kendrapada district. The 200-year-old puja conducted by Durga Prasan Acharya’s family in the village offers fish to the Goddess as ‘Mahabhog’.

“We offer fish and rice to Devi from Saptami to Dashami. This ritual is being followed for 200 years now according to the Tantra and Shakti tradition in which non-vegetarian food is a part of the offering to the deity,” said the chief patron of the Puja Durga Prasan Acharya.

“The ritual began after my ancestors, who were Zamindars, moved to Endar village around two centuries ago,” he added.