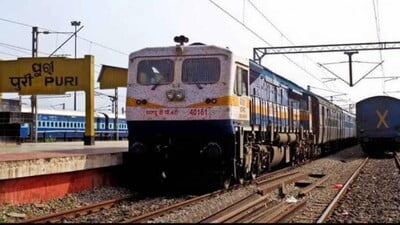 Bhubaneswar: As announced by Railway Minister during his recent visit to Odisha, Indian Railways would run 205 special trains to and from Puri during annual Rath Yatra.

Since the Rath Yatra was organised without participation of devotees for the last two years due to COVID restrictions, the Railways expects more people to gather at Puri this year. Considering this, East Coast Railway (ECoR) has taken necessary steps to facilitate pilgrims with reserved class accommodation, for the trains leaving from its jurisdiction towards Puri and vice-versa, apart from the special trains from neighboring states.

Similarly, for Sandhya Darshan of deities July 8, total 7 pairs (3 pairs from Mahipur and 4 pairs from Khurda Road) of special trains will run towards Puri and vice versa.

On the day of Bahuda Yatra on July 9, as many as 10 pairs of special trains from Paradip, Mahipur, Cuttack, Berhampur, Bhadrak, Khurda Road and Keonjhar will run towards Puri and vice versa.

For Sunabesha of the deities July 10, total 11 pairs of special trains from Paradip, Mahipur, Cuttack, Berhampur, Bhadrak, Khurda Road and Keonjhar will run towards Puri and vice versa.

On the day after Sunabesha, 6 special trains will leave Puri towards Gunupur, Rayagada, Bhadrak, Visakhapatnam, Keonjhar and Mahipur and one train from Keonjhar to Puri.

Three pairs of trains will run between Khurda Road and Puri and two pairs between Mahipur and Puri from July 2 to 7.