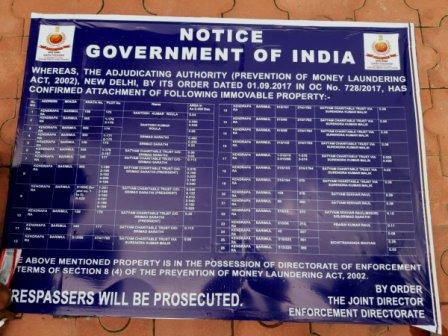 Kendrapara: The Enforcement Directorate (ED) put up a notice against trespassing at the ashram of self-styled godman Sarathi Baba at Barimula in Kendrapara district on Saturday.

The notice mentioned that the ED had attached immovable properties of the ashram and also warned people against entering the premises.

“Whereas the adjudicating authority (Prevention of Money Laundering Act, 2002), by its order dated September 1, 2017, has confirmed the attachment of the following immovable property,” said the notice, which was put up by a four-member ED team.

Notably, Sarathi Baba alias Santosh Raul was released from Choudwar Circle Jail on Thursday evening after the SDJM court granted him conditional bail. Among other conditions, the court has restrained the godman from entering his ashram at Barimula.

Bhubaneswar Flights To Mumbai Delayed Due To Rain

GST On Electric Vehicles Slashed To 5%