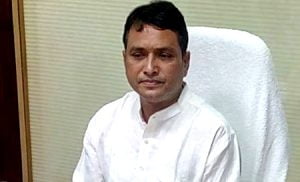 Bhawanipatna: Minister of State for Home Dibya Shankar Mishra, who has been under attack of opposition parties for his alleged link to prime accused in Mamita Meher murder case, faced BJP protest during a visit to Junagarh in Kalahandi district on Sunday.

According to sources, while the minister along with BJD’s organisational secretary Pranab Das was going to attend a party programme, BJP workers showed black flags and hurled eggs at his car.

Following the incident that took place near College Chhak in the town, tension prevailed in the area. It also led to a scuffle between BJP workers and BJD supporters accompanying the minister.

It may be noted that the BJP and the Congress have been demanding the resignation and arrest of minister Mishra for his alleged complicity in the school teacher Mamita Meher murder case.

Mishra has been accused of having close link with prime accused in the case Govind Sahu, who was the president of the management committee of Sunshine English Medium School where Mamita was a teacher.