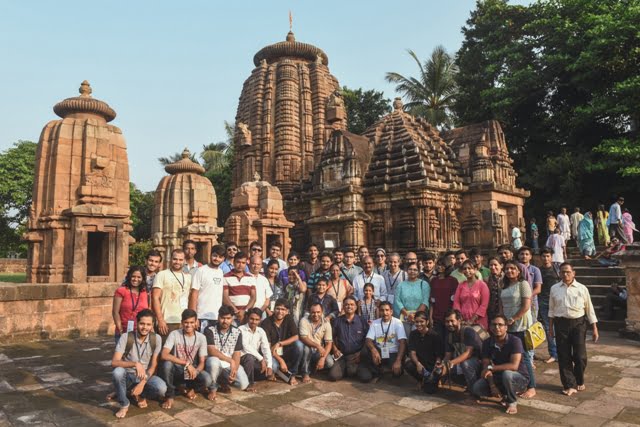 Bhubaneswar: With Durga Puja round the corner and worshipping of the goddess on in several temples in Old Bhubaneswar, participants of 41st Ekamra Walks were introduced to Shakti or Durga and evolution of her different forms.

While they first saw the seven forms of Mother Goddess (Shakti) on the ceiling of Mukteswar Temple and the walls of Parsurameswar Temple, during the walk along other monuments and important places of tourist attractions, guide Satyaswarup Mishra also explained how these seven gradually got to the present 108 forms.

Explaining in details during the visit near 7th Century Parsurameswar Temple, Mishra said, “Previously people thought that Gods were the epicenter of divine power, but later the focus shifted to Goddess, which took form of Chamunda, Indrani, Brahmani, Varahi, Vaishnavi, Maheswari and Kumari. Later the forms increased to 64 as seen in 64 Yogini Temple during the Tantric influence and went up to 108. For this reason during religious procession of ‘Kalash sobhayatra’, we see 108 holy pitchers being carried from a nearby holy water body.’’ 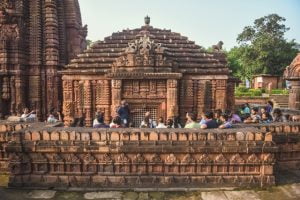 Santosh Kumar Gahan, Chief Construction Engineer at Upper Indravati Hydroelectric Project, who came all the way from Nabrangpur district, said “During our engineering days at UCE Burla, we had gone to Delhi on a study tour. From there I had bought two books on monuments of Bhubaneswar and Delhi. I still have those books published by Archaeological Survey of India. Today, while walking through these monuments with the guide explaining their significance, I was remembering my good old engineering days.’’

Gati Narvekar, a pass out from National Institute of Design, Ahmedabad, who is working as a designer at an international consulting agency in Delhi, said, “Every time I visited the city in the past, my work would end on Friday and I would leave the next day. However, after hearing a lot about Ekamra Walks, I stayed back this time only to take part in it and I am really happy to see so many beautiful monuments starting from as early as 7th Century.’’

Naina Thota from New York, who is on a six-month Odisha tour working on rural health projects of Gram Vikash, said, “I am really happy to see so many old monuments in this historic city and also the rich traditions that still intact.’’

It can be mentioned here that during the 40th Ekamra Walks last week Naina’s friend Lauren Hafford from Colorado participated in the heritage tour in the city. Lauren is also working for Gram Vikash on sanitation issues in rural Odisha.

More than 60 people came for the guided heritage tour in the Old Town area and visited temples like Mukteswar, Parsurameswar, Swarnajaleswar, Kotitirtheswar, Ananta Vasudev, Lingaraj, Chitrakarini, Sari, Mohini and Vaitaal. They also visited Bindusagar, Old Dudhwala Dharmashala and the medicinal plant garden Ekamra Van, which has a collection of more than 200 medicinal plants.