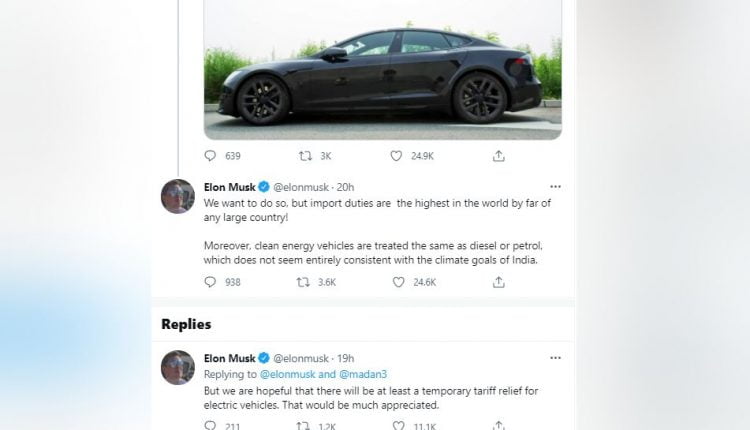 New Delhi: Car enthusiasts have been waiting long for Tesla to come to India. The pioneer of electric cars, however, has sought a reduction in import duties of electric vehicles (EVs).

In a reply on Twitter, CEO Elon Musk said a Tesla factory in India is ‘quite likely’, but only if its imported cars first succeed here. He is hoping for a ‘temporary tariff relief’ for electric vehicles.

He pointed out that import duties are the highest in the world here ‘by far of any large country!’

Currently, India charges 100 per cent customs duty on fully imported luxury cars. Tesla wants the import duty to be reduced to 40 per cent.

Tesla has registered an entity in Bengaluru and is looking to start operations.

The American carmaker had taken pre-bookings for the Model 3 from India back when it launched in 2016.

140 dead, Over 100 Missing As Maharashtra Reels Under Torrential Rain