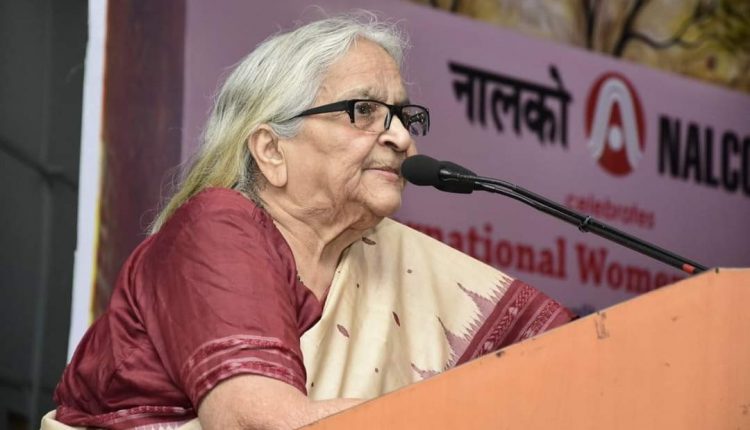 Cuttack: Eminent litterateur and former editor of Odia daily The Samaja, Manorama Mohapatra, passed away while undergoing treatment at SCB Medical College and Hospital here on Saturday evening. She was 87.

She was admitted to SCB after experiencing pain in her chest, family sources said.

Chief Minister Naveen Patnaik has expressed grief over her death. “An academic, orator and a woman of letters, late Mohapatra has created a special place for herself in Odia literature. She took a leading role in creating awareness in various social fields and rights, especially those related to women. As the editor of The Samaja, she set high moral standards in journalism. Odisha has lost a great orator and a great woman,” the CM said.

Mohapatra inherited the mantle of the editorship of the Odia daily from her father Dr Radhanath Rath in 1998. Prior to that, she contributed as a columnist and presented an analytical and critical analysis of contemporary issues under the column, Jhitipiti Kahe Satakshi.

Besides contributing to the fields of literature and social work, she dominated the space of public speaking for more than 60 years.

A revolutionary collection of poems on women emancipation and empowerment, Juar Jeiunthi Uthe, was her first book to be published in 1960. Her first book on stories was Band Gharara Kabat was again on the theme of women empowerment.

Mohapatra was feted with the Sahitya Academy Award in 1984. She was honoured by the Rama Devi University with the Honorary D.Lit Award in 2019.

For her immense contribution to the field of literature, she was appointed as Secretary of Utkal Sahitya Samaj from 1982 to 1990 and as President of Orissa Sahitya Academy in 1991, the first woman to hold this post, till 1994.