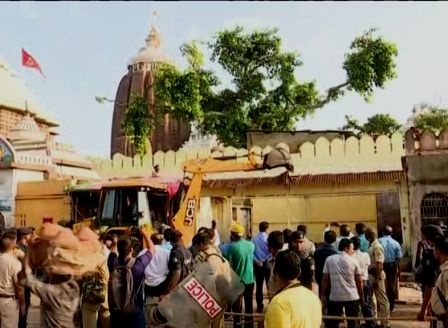 The drive to declutter the shrine area began at 6 am in the presence of 24 platoons of police, eight local magistrates, Puri collector Balwant Singh and SP Umashankar Das.

Talking to the mediapersons, additional collector Binay Kumar Dash said government and private buildings near the boundary wall of the temple will be demolished in the first phase. However, a decision on demolishing structures within the 75-metre periphery of the temple wall will be taken later.

Notably, the Odisha Cabinet on August 16 had approved a proposal of the Law Department to implement the recommendations of Justice BP Das Commission of Inquiry to vacate 75 metres of the area around the 12th century shrine for the convenience of devotees and security of the temple.

The district collector has been entrusted with the task of land acquisition and survey work of the specified areas to execute the recommendation of the Commission and provide compensation to the affected people and the agencies and ensure their proper rehabilitation.

Meanwhile, servitors, members of Mukti Mandap and the Jagannath Sena have threatened to move the Supreme Court against this decision of the state government.