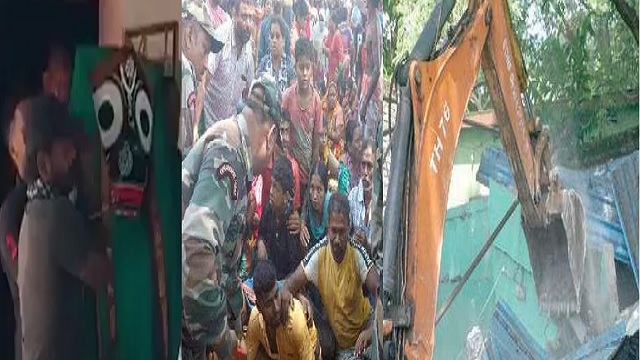 Cuttack: Tension ran high at Bidanasi in Odisha’s Cuttack on Tuesday after locals opposed the eviction drive carried out by the Cuttack Development Authority (CDA) in their locality.

According to sources, CDA officials were carrying out the eviction drive at Subhadra Khshetra near Bidanasi police station in Nuasahi. The residents, mostly slum-dwellers, protested by rolling on the roads after a Lord Jagannath temple was demolished along with other structures. As tension ran high, police were deployed.

The eviction drive is being carried out to make way for a commercial complex. There is also a plan for a residential complex. Around two acres of land were cleared of settlements on Tuesday.

CDA authorities bought 16-17 acres of land in the area from the Revenue Department in 2007. However, it could not take possession of the land as slum-dwellers have encroached upon it.

Slum-dwellers opposed the eviction drive near Petanala in Bidanasi on Monday and demanded rehabilitation.

Know The Story Of Odisha Boy, Who Made It To Under-19 Indian Cricket Team