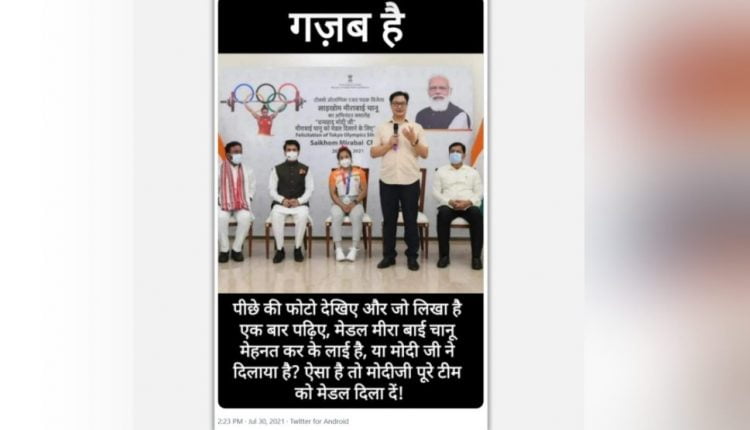 Mirabai won a silver medal in the 49kg weightlifting category at the 2020 Tokyo Olympics on July 24. She is the first to do so in Olympics from India.

The banner’s Hindi text translates to, “Thank you Modi ji for giving a medal to Mirabai Chanu.”

The image has a caption that translates to, “Look at the background of the photo and read what’s written. Meera Bai Chanu has brought the medal by hard work, or Modi ji has given it? If so, then Modiji should give medals to the entire team!”

However, this image is morphed. The real image doesn’t carry such a message as can be seen in the video shared by PIB India:

A historic decision taken to establish National Sports University in Manipur was another big achievement for the northeast region.

I congratulate @mirabai_chanu on behalf of 135 crore Indians and the Parliament, for her achievement – Union Minister @ianuragthakur pic.twitter.com/r8fGNbheE5