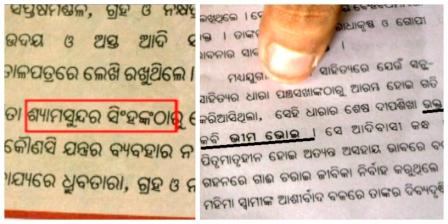 Bhubaneswar: Some glaring factual errors have been found in the books prescribed by the State Council of Education Research and Training (SCERT) for Class III and Class IX in Odisha.

In Class III MIL book, the father of eminent astronomer Pathani Samant has been mentioned as Shyama Sundar Singh instead of Shyamabandhu Singh Samant on page 32 under the topic, ‘Tulasi Dui Patraru Base’.

Similarly, on page 97 of the Class IX MIL book, eminent poet Bhima Bhoi is mentioned as Bhakta Kabi instead of Santha Kabi. In fact, renowned poet Madhusudan Rao is known as the Bhakta Kabi.

Expressing grave concern over the factual errors, parents, guardians and educationists said that the SCERT should crosscheck and correct such misleading information in the books.