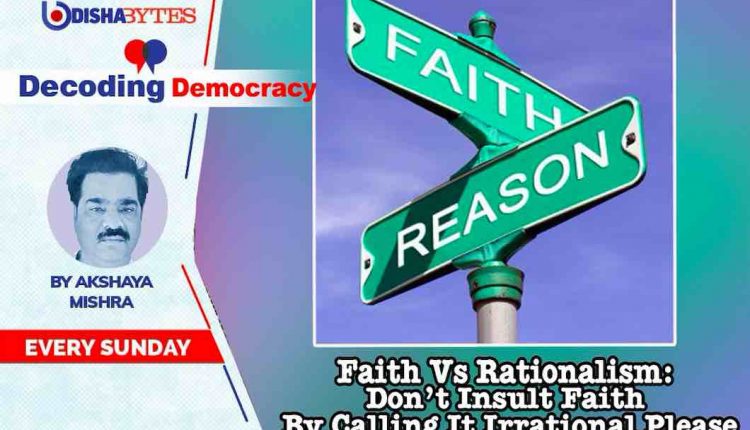 Are faith and rationalism mutually exclusive entities? The line of thought insisting on it makes it categorical that both don’t mix. If one is faithful, one has to be irrational. Conversely if one is rational, one cannot be faithful. Does it work that way actually in the real world?

Are we demeaning the faithful by calling them irrational? Possibly we are. Because faith, too, is a rational choice we make. We are not herd animals bound strictly by the code of blind loyalty. Being a thinking creature, each person may have a differing perspective of faith than the other. Absolute uniformity in their behaviour is practically impossible. In that case, who decides what faith exactly is?

Many questions hang heavy in the air as the rationalist vs traditionalist debate rages across the country. The debate goes back ages, across all religions, through many flashpoints and violent clashes, so expect no conclusive answers now. Expect, however, more rigidity on both sides of the divide and more fresh converts to the rank of both and the possibility of more serious conflicts in future. Expect the intellectual culture and thought space in the country to experience deep changes.

The framing of the entire conflict as rationalists vs traditionalists is a bit problematic. The semantics seem out of place. The word rational is loaded with positive connotations. It is linked to logical thinking, capacity for reasoning and being sensible, everything that makes humans a superior species to animals. It is the building block of civilisations and cultures. It has been the driving force behind mankind’s material and intellectual progress through history. The world over, people who are irrational, illogical and insensible are treated as different from normal people. Surely, something is flawed with the usage of the word here.

Moreover, whoever said faith is antithetical to rationality? The term ‘ traditionalist’ too needs some clarity. Any person having faith in traditions – particularly religious traditions – need not be a fanatic, who aggressively seeks to impose his beliefs and exercise control over others. Even a fundamentalist can stop short of being an extremist. Like all religions, Hinduism has its fanatics, conservatives and liberals. None of the categories needs expounding. The difference is in the degree of conformity to set beliefs and practices, and the flexibility one exercises while observing them.

The deviation from the latter is a rational choice, based mostly on circumstances. Rituals meant for agricultural seasons in rural areas may not be easy to follow in a metropolis; working couples may not have time for elaborate ceremonies; someone may restrict oneself during Diwali celebrations out of concern for the environment; and the younger generation, busy with its own struggles, may simply be unaware of the many niceties of religion. There are bound to be compromises and pragmatic adjustments. The deviation does not necessarily tantamount to being anti-religion. A traditionalist can be a liberal too, doing a fine balancing act between religion and life’s demands.

Believers vs non-believers or faith vs anti-faith or bigots vs liberals or rationalist vs irrationalist perhaps puts the scenario in a more accurate perspective. We are actually presenting the wrong picture of Hinduism and Hindus to the world by painting them as anti-rational. The Hindu ecosystem always buzzed with incisive intellect, a quest for knowledge and a search for truth. The ancients with their tremendous achievements in different areas of science and philosophy actually defined what rationalism and being rationalist stood for far more than their Western counterparts did. If someone claims India was always a faith-centric entity, one is effectively rejecting its great past.

The current debate narrows down the whole ecosystem to a singular facet: religion; and further narrows it down to practices and rituals that go with religion. The true Hindu should consider this as an insult, but let that rest for now.

Now coming back to the core question, why is rationalism such a detested word among a section of the minders of religion? The choice of the expression ‘a section’ is deliberate, because as we mentioned earlier not all Hindus are extremists of the intolerant kind in their religious beliefs. At no point there’s a hint that a Hindu liberal would abandon Hinduism and embrace some other religion. Then why?

The answer to the question could be fear, of questions and their consequences. Rationalism is about raising questions. The answers follow logical thinking backed by reason – an edifying trait with Hinduism manifests from the days of Upanishads and through saints who appeared in various phases of our long history. The culture of questions spurs the spirit of enquiry and scientific temperament.

This trend, for some, is a threat to the status quo. They believe it has the potential not only to upend entrenched beliefs and practices but also to drive many people away from religion. The second, as is evidenced from the life around, is grounded more in imagination than in reality – a liberal Hindu hardly dumps his identity marker despite asking questions. The first is the source of the entire conflict scenario we are presented with. The questions on rituals linked to faith hurt vested interests – the self-proclaimed protectors of religion – more than the cause of religion itself. The former stand to lose their social standing and benefits they believe they ought to enjoy as entitlement if more people turn rational.

Fanatics in all faiths want to control religion and restrict it to their constricted worldview. The worldview tends to stretch out to social, political and economic spheres. It can only be successful when reason is subdued and free-thinkers are put in place. Abrahamic religions have had their intense in-community fights with varying inconclusive results. Liberals in Islam has lost out in some countries, while in some they have managed to prevail. The Taliban’s dominance in Afghanistan is an example of the former. Countries such as Turkey can be counted in the other category. In India, the current phase of tussle roughly goes back to the days of Raja Ram Mohan Roy, the Father of Indian Renaissance, two centuries ago. The ruling elite in the post-independence phase sided with the liberals. The tables have turned now.

The consequences of marginalising the culture of enquiry, questions and free thinking can be dangerous. Since faith asserts itself through a system of controls, fanatics see its success in extending their influence wider and wider. Its outreach, as is noticeable in the Taliban’s case, can easily transcend into all secular aspects of human life, including education, science, lifestyles, social behaviour and so on. This would also mean the end of the idea of dissent, and the idea itself, and subsequently the democratic spirit.

Faith is good, but it need not be devoid of rationality. It must allow space for questions. Hinduism must not follow regressive trends in other religions. Its greatness lies in healthy arguments, and yes, rationality.