Fani-Hit People Of Puri Protest Over ‘Discrepancies’ In Beneficiary List 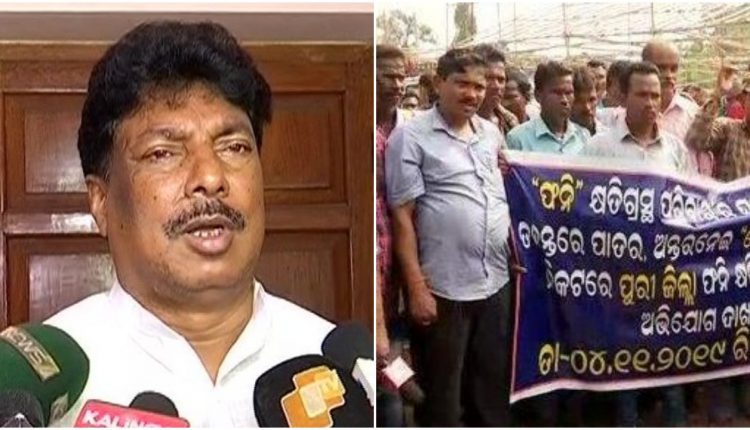 Puri/Bhubaneswar: Alleging gross irregularities and inordinate delay in the disbursement of the compensation and financial assistance six months after the devastating cyclonic storm Fani, hundreds of people from Puri and its adjoining areas staged a protest near the office of Lokayutra in Bhubaneswar on Monday.

BJP spokesperson Sambit Patra along with MLAs of Puri, Brahmagiri and Satyabadi and hundreds of villagers also met Puri Collector Balwant Singh over the issue.

Talking to the media in Puri, Patra said these people have not been included in the beneficiary list despite having suffered heavy damage during the cyclone.

“The financial assistance has been provided to people on the basis of party affiliation. Those who support the ruling-BJD received Rs 95,000. More than one person of the same family has also been compensated while poor and eligible beneficiaries have been left out,” Patra alleged.

The collector said that the severely-affected blocks were provided maximum compensation while others received compensation in accordance with the survey report. “After covering 2.78 lakh families, if people still allege that they have been left out, we will take the necessary steps and identify those persons,” he said.

More than 300 families from Satyabadi, Kakatpur, Nimapara, Delang, Kanas and Pipili met the Lokayukta at his office in Bhubaneswar and told him that the district administration had conducted a series of surveys and sent a team for geo-tagging to their areas after the cyclone. The team took photos of their damaged houses. “Our names are missing from the beneficiary list. On the contrary, the people with concrete houses provided to them under Pradhan Mantri Awas Yojana figure in that list,” they pointed out.

Asked about the matter, Revenue and Disaster Management minister Sudam Marandi said that the affected people in the state have been provided with necessary assistance on the basis of the survey. “If some needy are left out, they will be compensated under other housing schemes,” he said.