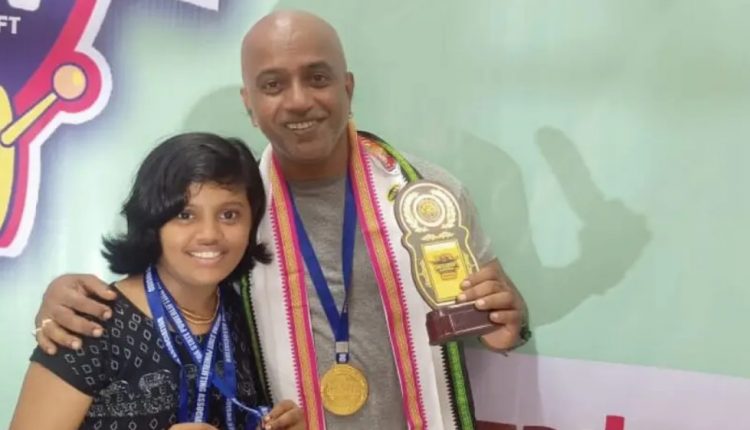 Koraput: In a rare incident that would make a father proud, a man and his minor daughter have won gold medals in a power-lifting event in Odisha capital.

Biswanath Nayak, an advocate and a power-lifter of Soura Sahi in Jeypore of Koraput district and his 14-year-old daughter Baibhabi Nayak participated in power-lifting in different age groups in Railways’ Odisha State Championship, held in Bhubaneswar recently.

While Biswanath won gold medal in 77 kg Master’s category, Baibhabi bagged gold medal in 55 kg below 14 age category in the championship. The father and daughter were felicitated on the same dais.

Baibhabi, a Class VII student, said she practises power-lifting in gym or house at least one hour everyday. “My father and brothers help me in my exercises. Coaches Ratnakar sir and Rudranarayan sir guide me in learning the techniques,” she said.

This is for the first time that Baibhabi participated in any major event. On her future plans, she said, “I wish to participate in national and international events and earn glory for my country.”

For Biswanath, power-lifting has been a passion. He has been doing body-building and power-lifting since he was a Plus II student. He has won several awards in district, state and national levels. He has already bagged 9 medals in state championship and 2 silver and 2 gold medals at national level.

On his daughter’s achievement, he said, “She has succeeded due to her own efforts and determination. She used to watch me while working out at home. She got inspiration from me and started the practice on her own. We do not put any pressure on her. But I want to see her excel at national and international events.”

Interestingly, Biswanath said neither he nor Baibhabi takes non-vegetarian food in their diet and his entire family is vegetarian.

Two Litterateurs From Odisha To Get Sahitya Akademi Award 2022