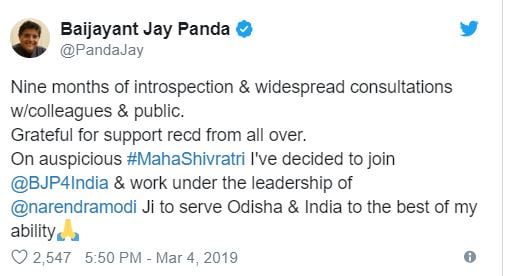 Breaking the news on his official Twitter handle, the industrialist-turned-politician wrote that he had decided to join the saffron party and work under the leadership of Narendra Modi after nine months of introspection and consultation with colleagues and public.

Nine months of introspection & widespread consultations w/colleagues & public.
Grateful for support recd from all over.
On auspicious #MahaShivratri I’ve decided to join @BJP4India & work under the leadership of @narendramodi Ji to serve Odisha & India to the best of my ability🙏

BJP Spokesperson Sajjan Sharma had confirmed the news earlier in the day.

BJP sources said a senior party leader brokered the deal between Baijayant and the party central leadership ostensibly to boost the party fortunes in Kendrapara, where the BJP support base is weak. The move is also being seen by some as an effort to apply brakes on a certain powerful group.

Speculation has long been rife about Baijayant being positively inclined to the saffron party, though he has remained tight-lipped on the issue. This had even led to his ouster from the BJD.

The former MP had resigned from BJD, of which he was MP four times, on May 28, 2018, after being suspended from the primary membership of the regional party on January 24 that year for his alleged anti-party activities.

As a columnist, he generously heaped praises on several policy decisions of the Modi government and was often seen hobnobbing with the right wing ‘elites’ in Delhi. His close association with the right wing camp had once made a journalist suggest on Twitter that PM Modi should appoint him to a Cabinet position.

However, he was made to wait in the wings even as BJP inducted former bureaucrat Aparajita Sarangi in the party with much fanfare in November last year.

Amid these uncertainties, Baijayant had in January this year hinted at forming a new political party or a combined coalition to unseat the Naveen government in Odisha. The combined coalition could include leaders, who were once part of the “Biju parivaar” but sidelined by the party supremo, he told a news portal and mentioned Damodar Rout, Bijoy Mohapatra, Dilip Ray, among others, as the possible key figures.

There was also speculation that he would contest the 2019 Lok Sabha elections from Kendrapara as an independent with tacit support from the Congress.