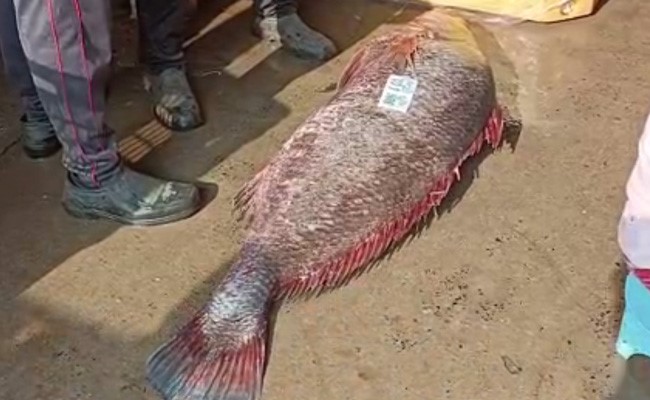 Balasore: The fishermen of Odisha’s Balasore once again netted a rare Telia Bhola fish having high medicinal value and sold it for a whopping Rs 5 lakh.

According to sources, a group of fishermen from Jaleswar block in the district had gone for deep sea fishing in a mechanised boat in Bay of Bengal two days back. During fishing at sea mouth near Digha in West Bengal, a giant fish was caught by them in the net.

They identified it as Telia Bhola fish which weighed 35 kg. Later, the fish was auctioned for Rs 5 lakh. A pharmaceutical company from Kolkata purchased the fish for its medicinal value.

The fishermen said Telia Bhola fish is usually found in deep sea. They were lucky to net it in sea mouth.

The body parts of Telia Bhola fish have high demand in the international market for its medicinal value. Its maw, which has high collagen content, is used for preparing drugs for treatment of incurable diseases. Fish maw is dried swim bladders of the large species of the fish in its stomach.

It may be noted that the fishermen of Mohana of the district had netted 28 Telia Bhola fish off Digha coast last month. Each fish weighed 8-10 kg and was sold at the rate of Rs 14,000 per kg. A Kolkata-based pharmaceutical company bought the entire lot at Rs 35 lakh.