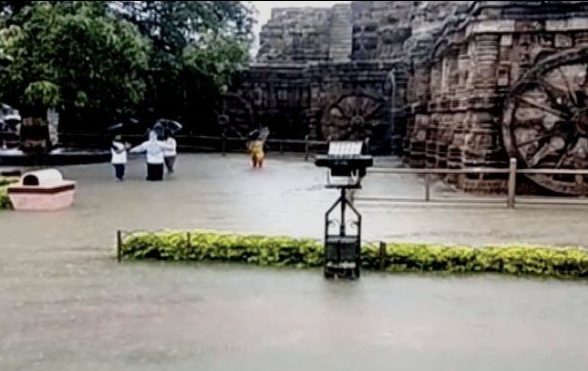 Bhubaneswar: Chief Minister Naveen Patnaik on Monday urged the Centre to fix the waterlogging problem at the Sun Temple in Konark on a war-footing.

“The Sun Temple is an exceptional testimony, in physical form, of the 13th century, under the reign of Narasimha Deva I (ad 1238-1264). This temple complex is now facing a perpetual problem of waterlogging which affects the temple very much causing problems to the visiting tourists as well as hurting the emotions of the people,” Naveen said in a letter to Union Minister of State for Culture Mahesh Sharma.

Stating that waterlogging posed a serious threat to the longevity of the temple, he said it is now imperative to take up the measures to drain out the stagnant rainwater from the premises at the earliest. “The Archaeological Survey of India (ASI) which looks after the temple may be asked to take up immediate steps for proper drainage of water on a permanent basis,” he pointed out.

The Chief Minister also said that his government is keen to take up the drainage work, if ASI gives due permission. “However, what is important is that the flooding problem that poses threat to this world heritage monument is immediately attended to and a permanent solution is found,” he observed.

Drawing the attention of the Union minister, he said that a majority of the tourists were left disappointed as they had to wade through knee-deep water to have a close look at the sculptures of the temple.