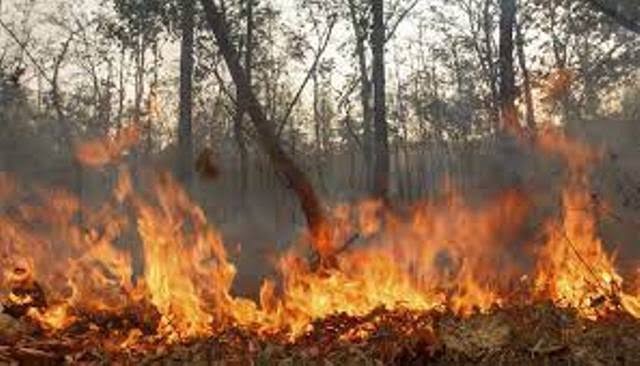 Bhubaneswar: Even as summer heat is yet to peak in the state, forest fire has been reported from two districts, threatening the lives of wildlife and green cover.

According to sources, the fire in Damerikia forest under K Nuagaon forest range of Baliguda forest division in Kandhamal district has been spreading fast for the last few days. The dry leaves covering the forest ground has helped the fire spread rapidly throughout the area.

While the fire has already spread to 6 nearby hills, the Fire personnel deployed by the district administration have found it tough to control the fire. They feel handicapped in their efforts considering the vast area that has come under the inferno, the sources said.

As the forest fire rages, small reptiles, small wild animals and birds are feared to have perished in the forest range.

Similarly, Sankhapoi reserve forest under Athgarh forest range in Cuttack district has also caught fire. Though the locals have informed the local authorities about the fire, they alleged that no step has been taken to bring the inferno under control.

Though the cause of fire in both the places has not been ascertained, it is suspected that the poachers may have started to hunt the wildlife.

It may be noted that during early summer last year, fire broke out in Bhalukasuni area of Tinikosia reserved forest in Balasore district in March.

Later in the year, fire broke out in Gandhi Kailash hill near Bhanjanagar town in Ganjam district in May. In another wildfire in vast stretches of Gunjusahi forest under Rashgobindpur range in the same month, more than 20 acres of forest area perished.

Another forest fire was also reported from Budhadangar of Kendumundi village and Rengaljuri forest on Patnagarh-Padampur road in Balangir district. Forest areas in Turekela and Khaprakhol blocks were also under the grip of fire.