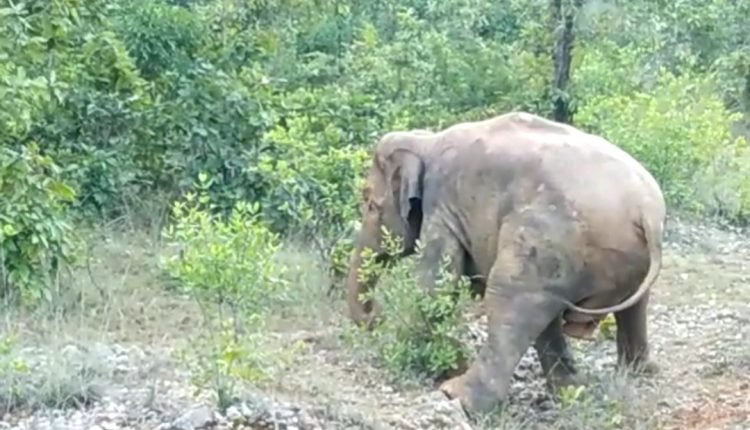 Keonjhar: A wild elephant struggled and cried in pain to deliver a baby in Champua forest range throughout Thursday, while the Forest officials found themselves helpless as she was encircled by a herd of pachyderms.

According to the sources, a herd of 25 elephants including five tuskers, 12 female elephants and 8 calves were moving in Jamdalak forest area under Champua range for the last few days. On Thursday morning, two elephants safely gave birth to babies.

Another 20-year-old elephant felt the delivery pain in the morning. As she struggled to deliver the baby, she moved with pain across the forest.

Forest officials along with a wildlife treatment team reached the spot to extend any possible help. They pushed a huge crowd of the area that had gathered to a distance from the place to prevent the elephant from getting disturbed.

But the Forest officials and wildlife team could not go near the elephant as she was encircled by other members of the herd. They had to stand at a distance and observe the incident. Till evening, only two legs of the baby had partially come out of the elephant’s womb.

Pion Nayak, the forester present at the spot said, “We are waiting for its normal birth since the morning as it is difficult to go near the elephant. Two female elephants have already given birth to two healthy baby elephants”.

Welcome Prediction: ‘Coronavirus Will Get Weaker And Become Common Cold’