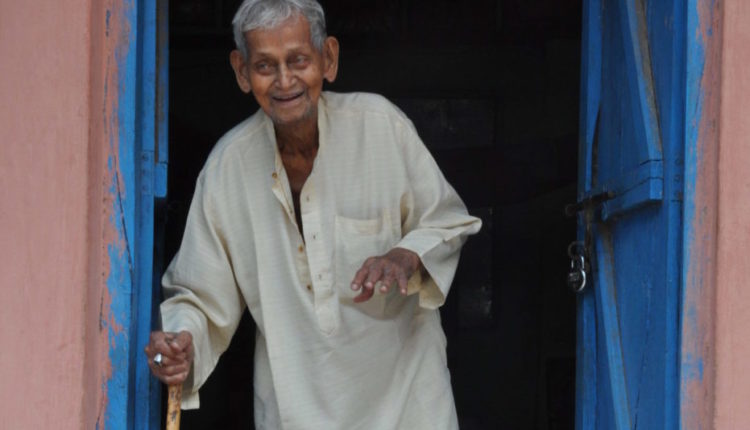 Pipili: Kashinath Sahoo, theatre exponent, dramatist and playwright, died at Pipili on Wednesday. He was 108.

He died at his residence after just a few hours of falling ill.  He was among the founders of Annapurna Theatre Group and had staged more than 100 plays during his lifetime. He had been honoured with any rewards and awards and felicitated for his performances.

What was little known about him was that he was a true Gandhian, who had written many small plays during the freedom struggle years. Kashinath was perhaps the last living person who had participated in Mahatma Gandhi’s epochal Harijan Padayatra in 1934.  In fact, the young Kashinath was part of the group that had walked with the Mahatma from Dandamukundpur till  Pipili on May 12, 1934.

Inspired by the Mahatma, he had written nearly half a dozen plays which highlighted the freedom struggle. These were staged in Puri and Cuttack, and Kashinath escaped imprisonment from the authorities due to the indirect innuendo and slapstick effects of the plays.

He founded the first Cinema Hall of Pipili, Bijoyshree Talkies, which surprisingly is still running. He founded the Pipili Sanskrutika Parishad along with many other cultural organisations. He was among the founders of the Pipili Mahavidyalaya and Jawahar Vidyapeeth. He was instrumental in the holding of the annual Pipili Mahaustav and the Daya Mahaustav.

According to historian Anil Dhir, Kashinath Sahoo was the last living person who had had personal contact with the Mahatma Gandhi and had actively participated in the freedom movement. A humble and simple person, he devoted the entire last five decades of his life in the social and cultural upliftment of Pipili and its surroundings.

Even at this age, he has a sharp memory, did not use glasses and took care of himself, he added.

Dhir and Ramesh Mahapatra were compiling a book on Kashinath Sahoo and had spent many hours with him in recent months. The book would have been already been released but was delayed due to the COVID-19 crisis.