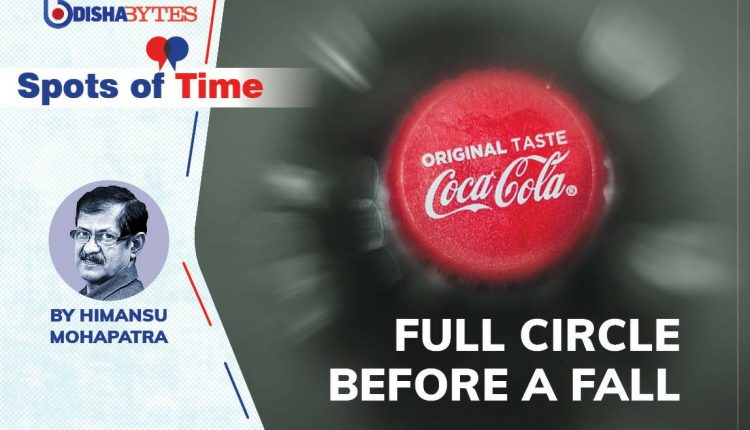 Half Circle Full Circle Right-angle A

He had first heard the magic formula for the magical drink in the home of his Asansol-based uncle several years ago. From his uncle’s daughter and son actually. They had learned it at the quiz competition in their English-medium school. Subrat had carried the rhyme back with him to Baripada where it had spread like wildfire among his school and neighbourhood friends.

The rhyme came to his mind now, as he sat in the famous soft drinks stall of Nila at the traffic square of Baripada. He had ordered the dark, fizzy liquid that came in small hourglass-shaped glass bottles that ‘dazzled like diamonds’. Amin Sayani’s words, uttered in his rich baritone in the radio advert for the newly-introduced drink that had taken the country by storm, lent an extra allure to the whole business. The cost of the drink was only 75 paisa. The year was 1974. Subrat was in his first year at college. Watching out for the brightly lit factory at Jagatpur, where the fizzy drink was produced and bottled, was the sacred thing that he and his friends did every time they travelled in a night bus from Baripada to Cuttack. Jagatpur, coming just before their bus entered the Mahanadi Bridge before the crack of dawn, signalled the arrival of Badambadi bus station of Cuttack.

Nila’s boy came, bearing a tray on which were glasses of lassi with straws and a couple of dark and orange coloured bottled drinks and empty glasses. He put down a dark bottle and an empty glass on the table before Subrat.

“Take away the glass. Bring another Coca Cola after ten minutes. And make it a masala drink.” Subrat instructed the boy.

Aah! Today he would act out to the full the fantasy of being an adult. He would drink the dark liquid frothing over at the bottle mouth, imagining it to be the forbidden drink that the rich and the respectable of the town were after. He had heard about Baripada Club where these people repaired to steal a sip of sura on the sly. They also had their sakis to whose abodes of amorous pleasure they would betake themselves under the cover of the night. These people didn’t, of course, bother Subrat. Who did were guys like Basanta and Bimal. They were normal college guys like him, but with neither morality nor lack of money to hold their hedonistic urges in check.  Alas! Subrat was too full of the first and too empty of the second.

Today was different. He had money. How did he have it?

Well, by shedding his mind-forged shackles.

That morning he had found a double-folded, crumpled pinkish delight on the bedroom floor of his uncle and aunt. He instantly knew it to be a twenty-rupee bill from its pinkish colour. He also knew it to be his struggling lawyer uncle’s. But he had picked up the note unhesitatingly. Subrat had had his first concrete proof of the truth of the old adage: open door will tempt a saint.

But no matter. Now the world was in his pocket. Nila’s soft drink stall was his first destination. From there to Garma Garam just behind Nila’s for the famous spiced mudhi mashed together with samosa and potato fritters and served in a conical leaf-cup. And then off to Roxy or Jagdhatri (the renamed Ambika) for the Rajesh Khanna starrer. It was not just the schedule for one day, but for 2 to 3 days in a row unless of course he chose to take his best friend along on each one of those days. But the inevitable happened. The bill slipped through his fingers. He was back to square one. It was at a time when he couldn’t have brought it back for the life of him that he heard a conversation between his uncle and aunt.

“Did you chance upon a twenty rupee note anywhere in this room? It was my fee. My client forked it out 3 days ago after a lot of fuss. I seem to have lost it. Probably it fell out of my trousers pocket while I was changing.”

“You should have looked carefully before the maid swept the room.”

“How would I know? You’re saying this is from 3 days ago. You should have told me the very day you lost it or given it to me for safe keeping. Besides, if the maid will flatly deny she has seen it there’s nothing to be done. We can’t afford to lose her.”

“Well, I remembered it only today. What damned luck!”

Lying in his string bed in the adjacent room, Subrat listened, his ears pricked up. He broke into a cold sweat. His uncle would ask him next. And he knew what that meant. He was a lawyer, an expert at interrogation. Reports of Subrat’s lavish spending in the last couple of days couldn’t have failed to attract notice, especially in a small town like Baripada. On top of that, he had a very bad temper and freely used at home what he was constrained to do at court or outside: his hand, especially in the service of truth. He would start by assuming that Subrat was lying and would slap him into confessing the truth.

Wonder of wonders, the raucous yell for his name did not come from the next room. No interrogation followed. But what Subrat heard next chilled him to the bone.

“I had kept the money for Subu’s college fees. Too bad I lost it. I have to now borrow from my friend.”

Subrat’s love affair with Coca Cola had come full circle before its fall.