Gujarat Bans Garba Events During Navratri Due To COVID-19 Pandemic 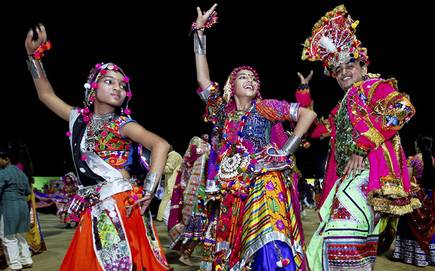 Ahmedabad: Navratri will be an insipid affair this year with the Gujarat government banning ‘garba’ events in the state due to the coronavirus pandemic.

The BJP-led government notified on Friday that it will not allow any big, medium or small-scale garba event in Gujarat during nine-day festival, beginning on October 17. The government has issued guidelines to be strictly followed during the festival, which generally sees large gatherings.

A standard operating procedure (SOP) has been drawn up regarding appropriate behaviour in order to prevent a spread of the novel coronavirus.

However, gatherings of less than 200 people will be allowed to worship Goddess Durga. Prayer time has been fixed for one hour, but nobody can perform garba at such gatherings.

Wearing masks, maintaining social distance and use of sanitizers must be followed at such gatherings, the government directive stated.

It will be mandatory to take permission from the authorities for organizing community prayers.