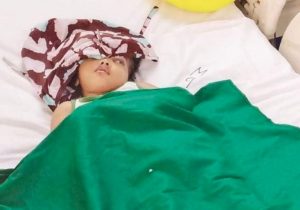 “There has been a marked improvement in Kalia’s health. He is kept on ventilator at times when it is necessary. We have decided to conduct his MRI (magnetic resonance imaging) scan in a few days,” Prof Sudhanshu Sekhar Mishra, head of the Department of Neurosurgery, said.

On September 28, the SCB authorities had sent an emergency message to the All India Institute of Medical Sciences (AIIMS), New Delhi to send Dr Deepak Gupta and Dr Rakesh Lodha for treating Kalia after he became critical with severe chest infection due to pneumonia.

The AIIMS authorities had discharged the separated twins Jaga and Kalia on September 6.  The twins were admitted to SCB the next day.

The twins, who hail from Milipada village in Kandhamal district, were successfully separated after an 11-hour-long surgery at AIIMS on October 25, 2017. A team of 30 specialists from the neurosurgery, neuro-anaesthesia and plastic surgery departments were involved in the surgery.