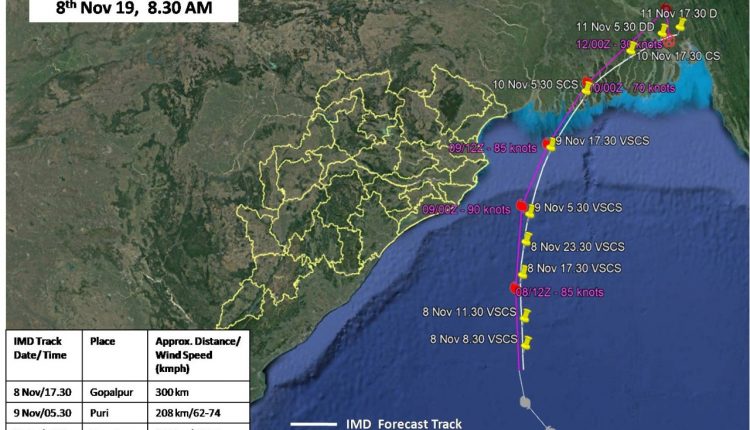 It is very likely to intensify further by early morning of November 9 and most likely to move nearly north-wards till November 9 morning and very likely to re-curve north-eastwards and cross West Bengal and Bangladesh coasts between Sagar Islands and Khepupara across Sundarban delta during the early hours of November 10 as a severe cyclonic storm with maximum sustained wind speed of 110-120 kmph gusting up to 135 kmph.

Under the influence of the cyclonic storm, IMD has issued orange and yellow warning for the following districts.

Bay of Bengal
Under the influence of the cyclonic storm, gale wind speed reaching 120-130 kmph with gusting up to 140 kmph is prevailing over the west-central and adjoining east-central Bay of Bengal around the system centre. It is very likely to increase gradually and become 145-155 kmph with gusting up to 170 kmph by the forenoon on November 8. It will gradually increase by the early hours of November 9 over the north-west and adjoining west-central Bay of Bengal for subsequent 12 hours and decrease gradually thereafter.

IMD has advised total suspension of fishing operations along the Odisha coast and deep sea area in the west-central and North Bay Bengal from November 8 till further notice.

It has also advised all ports to hoist the distant cautionary signal no-3.

It has also advised the state government that the following damage is expected over the coastal districts of north Odisha:

It has also advised the state government that the following damage is expected over the coastal districts of north Odisha:

Mentioned below are the actions suggested by the IMD to the Odisha government for the north coastal districts:
(i) Total suspension of fishing operations from November 8 onwards
(ii) Advise people in affected areas to remain indoors.
(iii) Stop the movement of people in motor boats and
(iv) Restrict the movement of the people along the beach.

Meanwhile, in a press briefing on Friday, Special Relief Commissioner (SRC) Pradip Jena said that the collectors of the north coastal districts have been instructed to take necessary steps to evacuate the people from the low-lying areas.