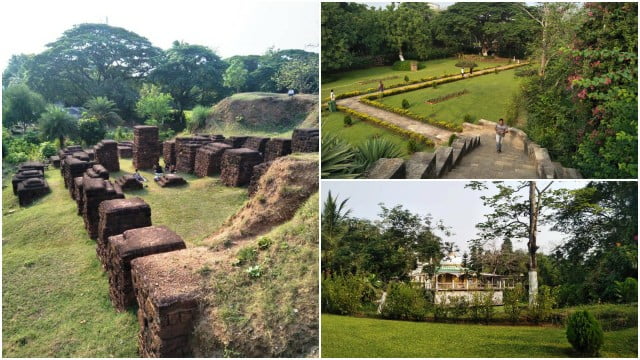 Cuttack: Some heritage lovers in Cuttack want the Archaeological Survey of India (ASI) to list their findings from excavations carried out inside the Barabati Fort complex.

“They have been excavating since 1912. There is nothing more left to excavate,” said Anil Dhir, researcher and active member of INTACH.

“We should all act as pressure groups and make the government list whatever has emerged in the excavations and create a museum here to preserve those,” said Dr Dipak Samantarai, a former All India Radio assistant director, who had organised “Barabati Beckons”, the first edition of a heritage walk from in front of Jawaharlal Nehru Indoor Stadium to the ruins of the Barabati Fort.

“The story of Barabati is the story of its destruction. Anybody who has conquered this part of the world has occupied the fort. There has thus been a systematic loot of the place since time immemorial,” said Dhir, as the over 40 heritage enthusiasts trudged their way up the mounds of what was once the Barabati palace. “It is said that the SCB Medical College was made from stone blocks from the Barabati Fort. The same blocks were used in the construction of the High Court, Cuttack Club. Who knows, some of our own houses might have been built using these stones. 99 per cent of Barabati has been lost in the past 150-200 years.”

Others concurred that it was sheer apathy on the part of ASI that it was not making a list of things that were lost, either plundered or taken after excavation to be kept in some museum in some other state. “They even came across a huge elephant skeleton during the excavations,” Dhir said. “Nobody knows where it went, along with all the other things, so many statues among them.”

Wildlife conservationist Biswajit Mohanty regretted the use of the place as a helipad for political leaders. He also wondered if ASI was doing anything about the encroachment happening on the premises. “Soon, broiler chicken too will be available here. Why are squatters not being evicted,” Biswajit asked. He also cautioned against holding of festivals at temples. “Odisha temples are not meant for festivals. The high-decibel microphones cause a lot of harm. Besides, when people converge in large numbers, birds follow and then their droppings litter the structures. The droppings are acidic and cause a lot of harm,” Biswajit said. He elaborated that these festivals are usually held in December. It takes almost six months, till monsoon arrives, for the droppings to get washed away. By then the harm is done.

At this point, somebody noticed Bikash Prasad Das, a railway mail service employee who keeps his date with photography on holidays. “Have you noticed his T-shirt,” asked Dhir? “It has all the values we stand for.” His T-shirt had various Cuttack symbols, from Maa Cuttack Chandi, to Netaji, to Baliyatra, to Tarakasi, “52bazaar 53gali”, as also Barabati, emblazoned on it. “My sister gifted this to me on my last birthday,” he said, as everybody suddenly switched their cameras from the ruins to his T-shirt.

From the Barabati ruins, the heritage walkers headed for the fort entrance and from there, via Shahi Quila Mosque and Gada Chandi Temple, towards the Judicial Museum. This used to be the official residence of the Odisha Chief Justice till 2012. The premises has photographs of all its illustrious residents, including the last chief justice to live there, Justice Gowda Gopala Gowda in 2012.

“Sometimes, even high-profile residents on the premises come in the way of protecting the heritage,” said Dr Samantarai. Elaborating on that, he said that ASI wanted to excavate the entire area, including where the Jawaharlal Nehru Indoor Stadium today stands. “But it was stalled by civil servants. A major objection came from Cuttack Club, which, as you know, has some of the most powerful and rich people of Cuttack and Bhubaneswar as its members. They put a lot of pressure on the government,” Dr Samantarai said.

Officially, he said, the excavations are still on. “But two years after the operations began in 1989, they stopped the exercise and slowly moved whatever findings were excavated to other museums. What we want is a museum on the site, showcasing the findings from there.

On the way back, he thought of suggesting to the government to introduce a bus ride linking all museums in the city for the benefit of students. He also agreed with Dhir’s suggestion for cleaning a portion of the moat on the premises and making it available for boating and recreation purpose.

Some enthusiasts entered the Shahi Quila mosque, clicked photographs and spoke to a cook on the premises about how to make the perfect biryani. The women covered their heads but still could not go in.

The plan was to go till Biju Museum at Anand Bhawan, the ancestral home of former chief minister Biju Patnaik, but the heat was catching on, so the group dispersed at the indoor stadium gates, till the walk’s next edition.

Odisha Bytes contacted ASI superintendent Arun Mallick, but he wrote back saying he was on leave and would answer queries at a later date.

Here’s Why Alia, Katrina & Others Are Not Voting Tomorrow

Cuttack Bird-Lover Shines As An Example Of Humanity During…