Heritage Walks: A Step To Reveal Mysteries Of Mayurbhanj 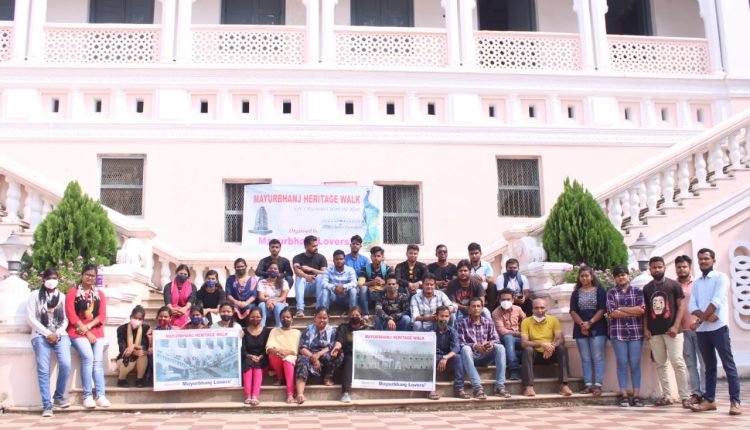 Bhubaneswar: Mayurbhanj, the northern most district of Odisha, has its own share of natural beauty, historical sites, heritage places, wildlife and cultural traditions in no small measure. As the efforts to showcase those seem to be inadequate, a youth-led initiative called ‘Mayurbhanj Heritage Walks’ has been launched.

In order to unravel the mystery called Mayurbhanj, which comes with its royals of the Bhanja dynasty, the palaces, Jagannath temple, Devi shrines, heritage buildings, festivals, wildlife, art and crafts, primitive tribal groups, two airstrips of the British era, shrines of religious followings like Jainism and Buddism and archaeological sites, the ‘Mayurbhanj Heritage Walks’ took its first step on October 10.  Currently, it would be two walks in a month and would expand as per the response and participation.

The debut heritage walk was attended by more than 40 walkers with equal participation of girls and boys. Initially, it would cover locations or circuits in the culturally rich district headquarters town Baripada and later, extend to other locations across the district.

During the first Mayurbhanj Heritage Walks, the participants were taken to the Mayurbhanj Palace on the Grand Road (Bada Danda) which is also part of the Bada Bazar area of the town. The heritage enthusiasts were told about the history and legends of the palace, its design and architecture.

Prominent member of the organisers from Mayurbhanj Lovers Kumaresh Nayak spoke on the efforts behind organising the heritage walk and Rushiraj Pattanayak described the story of the palace. As the first walk included the story behind Kichakeswari Temple near the palace and its unique Charminar style architecture, the walkers were given the details on the two historical structures of the town which attract public gaze every day.

The presence of Akshita Manjari Bhanjdeo, the descendant of Mayurbhanj royal family, during the walk encouraged the participants. Addressing the walkers, Akshita thanked them for their participation and hoped that more youths will join the walks in future.

“We hope that the legends and stories associated with Mayurbhanj, its unique wildlife, flora and fauna, people, tribal lifestyle, crafts and culture would get specific focus through the Mayurbhanj Heritage Walks. The event would make the people of this region proud of their land. The next walk is tentatively planned on October 24,” said Rushiraj Pattanayak.

It can be mentioned here that after Ekamra Heritage Walks in Bhubaneswar gained popularity, Cuttack Heritage Walks, Puri Heritage Cycle Ride and now Maurbhanj Heritage Walks have been added to the heritage walks scenario in the state.